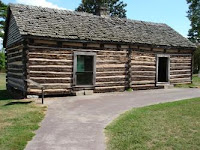 OK, so we returned from Tennessee today, and while there we visited The Hermitage, the home of the 7th president of the United States, my namesake Andrew Jackson. It was a cathartic moment for me, reading the plackards about how Jackson bought, sold, and gifted his slaves. It was eye-opening, that so-called civilized people could think of fellow human beings as property. And in fact showcases how in fact Blacks were not thought of as human at all, but merely as chattle to be dealt at the whims of their masters.

In the museum it became evident that Jackson thought the same of the indigenous Native Americans, with the passage of the Indian Relocation Act. The idea here was that these “savages” needed to be relocated for their protection, since they were killing White settlers, and were being killed themselves. So again, Jackson decided that it was in the Native Americans’ best interest to allow the Whites to take over their land, and move them to other areas, again for their protection. It had nothing to do with the fact that the Native Americans’ owned the land, and being smart, selected the best land upon which to live and to farm, after all, they were there first. So they were relocated to the worst lands, again and again. You get the point. And Jackson had the nerve to refer to the Native Americans’ as “savages”.
Look, what’s past is prologue, and I am rarely one to pull the race card. But this was an “in your face” look at history, that was life-changing to me in ways I haven’t yet discovered.
The picture posted is a slave “duplex”. As many as twenty slaves shared these 20×20 dwellings. Perhaps the most disheartening thing for me was putting myself into the mindset of the slaves of the time, waking each morning to see how White people lived, and then in the evening returning to their meager lives. They were not allowed to learn, earn additional income, and their food was rationed. There were no prison walls, barbed wire, or armed guards keeping the slaves captive, which to me is the worse form of prison…prison of the mind. Yes, they could have been killed escaping, but I ask you, how many prisoners would remain in America’s prisons, if they torn down the walls and got rid of the guards? This was a deplorable time in America’s history, and I can see many parallels with Blacks of today…prisoners of our own minds.
That’s my rant!
(c) 2008 Kevin Jackson
Kevin Jackson is an author of four books in sales and politics, as well being the author of The Black Sphere blog. He has been published in Africa News and Hoovers. Visit Kevin at http://theblacksphere.blogspot.com or email him at [email protected]
The Black Sphere online magazine is at www.openzine.com/theblacksphere, and you can catch Kevin on The Black Sphere radio show every Thurs 9P-11P Central (times subject to change) http://blogtalkradio.com/TheBlackSphere
Facebook Twitter
Kevin JacksonApril 14, 2008
2 minutes read