Only a few weeks after Jackson whispered that he wanted to “…cut [Obama’s] ‘pecans’ off”, Jackson is indeed still running with scissors. Jackson made front page news in Israeli newspapers today after he told an interviewer that Obama’s presidency will remove the clout of “…Zionists who have controlled American policy for decades.” Is The Reverend trying to “out” The Messiah as the Islamo-Facists that he is? This may indeed be Black on Black crime. Let’s see…

Jackson, speaking as he put it, a supporter of Obama [hopefully not a jock supporter] added, “…Decades of putting Israel’s interests first would end”. Obama is about change. And the change that Obama promises is not limited to what we do in America itself. It is a change of the way America looks at the world and its place in it.”

In an effort to distance themselves from Jackson’s comments, Obama campaign national security spokeswoman Wendy Morigi said in a statement , “As he has made clear throughout his career and throughout this campaign, Barack Obama has a fundamental commitment to a strong U.S.-Israel relationship,’’ the statement said. “As president, he will ensure that Israel can defend itself from every threat it faces, stand with Israel in its quest for a secure peace with its neighbors and use all elements of American power to end Iran’s illicit nuclear program.” 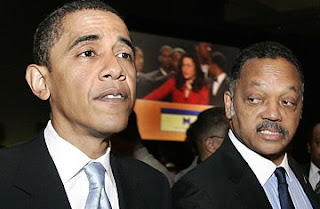 [Whisper] I’m going to let White America in on a secret in the Black community. Blacks will say one thing publicly, and then have a completely different view behind closed doors. It is taboo to air our dirty laundry publicly, and Jesse Jackson knows this. The statement made by Jackson violates at least two rules of the Black Underground, and Jesse knows it. He is the rogue Mafioso capo,who has turned state’s witness against Obama. Breaking the rules, Jackson is giving us the [wink] code on Obama’s real views towards the Jews. And of course Obama must deny this.

Now being an insider having spent 45 years in the Black community, I will teach you how to interpret Obama’s comments. And to do so, you must really pay attention to Obama’s words, as he is (1) a lawyer and (2) an elitist. So note the use of the word ‘fundamental’ in his position of support of Israel.

–adjective
1.
serving as, or being an essential part of, a foundation or basis; basic; underlying: fundamental principles; the fundamental structure.

–noun
2.
a basic principle, rule, law, or the like, that serves as the groundwork of a system; essential part: to master the fundamentals of a trade.

For most of us, fundamental means foundational, i.e. secure. So we would interpret this as complete unfettered support of Israel or definition #1 above. However there is “Obamaspeak”, which is “Clintonspeak with whip cream and a cherry“, where fundamental has a whole “nuther” meaning.

Jewish people take note. Obama is a racist against White America and against the Jewish people. He will take your money, and redirect it to Afro-centric programs, many of which will hurt Blacks more than they will help. His international policy will funnel money to Islamic regimes in Africa and the Middle East.

However, Obama will tell you want to hear, when in your presence, then disparage you behind your backs. Jackson, a person whom I normally consider as useless as a screen door on a submarine, is telling you in code what Obama is saying behind closed doors. So for once I will say for you to heed what Jackson has hinted.

Jewish people are right to be concerned about Obama’s Muslim ties, and they’d better be. He has spoken many times on his support of Palestinian rights, even as they continue to terrorize Israel. Obama realizes the need for the support of the Jewish demographic, particularly in Florida, so he will be his usual smooth self. But don’t let the smooth taste fool you. Like he is bamboozling the rest of America, he is also attempting to do the same with the Jews. Don’t fall for this. Jackson has given you “the inside scoop”.

Kevin Jackson is an author of four books in sales and politics, as well being the author of The Black Sphere blog. He has been published in Africa News and Hoovers. Visit Kevin at http://theblacksphere.blogspot.com or email him at [email protected]
The Black Sphere online magazine is at www.openzine.com/theblacksphere, and you can catch Kevin on The Black Sphere radio show every Thurs 9P-11P Central (times subject to change) http://blogtalkradio.com/TheBlackSphere
Facebook Twitter
Kevin JacksonOctober 16, 2008
3 minutes read
Don’t Miss Out!