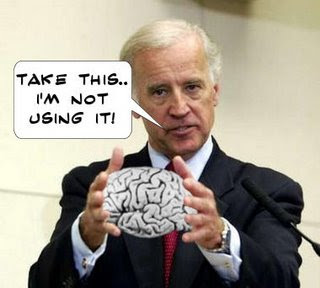 At some point we have all wondered why in the world would Obama select a de facto knucklehead like Joe Biden as his VP? When you consider that Biden has publicly stated that Obama essentially was not ready for prime time, the choice just didn’t make sense.
Obama is to silk, as Joe is to sandpaper. With the exception of coma victims, we are all aware that Biden suffers from “foot in mouth” disease, and has coined many “Bidenisms” over the past decades. Compound this with Biden always being the smartest guy in the room [Biden will “pencil whip” the crap out of anybody in a resume-writing contest!], and again, you wonder why oh why on ”Obama’s green earth” would he pick Biden?

Biden’s most recent gaff happened today, where he commented without knowing the press was in the back of the room, “…It will not be six months before the world tests Barack Obama like they did John Kennedy…” Biden went on to say, “I can give you at least four or five scenarios from where it might originate [mentioning the Middle East and Russia as possibilities], and he’s gonna need help.”

Rumor is John McCain dispatched a case of Cristal to Biden by courier, within minutes of Biden’s statement. The note attached said: “It’s three against one…thanks for the support!”

So why did the Anointed One choose Biden? I know you think you know the answer to this, and you likely believe it was because of Biden’s so-called foreign policy experience. Well you would be wrong. Don’t feel bad fellow Republicans, because the answer is not obvious. And you have not been trained to think as Obama does, and I have, so I will explain his reasoning. 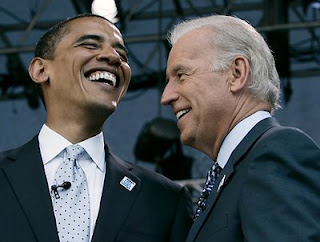 The answer is Obama is getting his revenge on White America, and I must admit he is doing it brilliantly. He is essentially exposing a supposedly intellectual, cultured White Senator, as the complete knucklehead that he is. And behind closed doors Obama, Michelle, and Reverend Wright are laughing their butts off at “Black Only” cocktail parties.

Obama is saying, “…here is a man that America holds in the highest regard, and I am showing them (he’s not one of us) and the rest of the world that all these White guys that you hold in such high esteem are two tacos short of a Mexican platter.”

Obama, though only half Black is a self-proclaimed Black man. Obama resents the idea that Blacks are considered less intelligent, and incapable of being in charge. So he had to expose a prominent White man as a dolt. Enter stage left, Joe Biden.

So Obama uses Biden as his public lab rat, performing a “Reverse Dr. Shockley” experiment on America, called The Biden Experiment. The Biden Experiment  intentionally “dumbs down” Biden publicly, thus making Obama appear to be more brilliant than he really is. And all Obama has to do let Biden out of his cage for the experiment to work.

Now we Republicans have known for some time that Biden’s “engine’s running, but nobody’s driving”, though you likely didn’t know of the Top Secret program now officially known as The Biden Experiment.

However, due to developments from today, in an extremely rare move, Obama ended funding to the program. Apparently Biden is starting to become more like that “Uncle” Obama refers to from time to time.

Asked for comments on the program by Fox news, and Obama’s comment was “…we are considering muzzling Uncle Joe or buying a new bus.” We were left to interpret the meaning of the second part of the comment.

An Obama publicist asking to be anonymous commented off the record, that “The Biden Experiment was an insurance policy for Obama, if elected, since nobody could possibly want Biden as president.”

Fox new was able to track down John McCain for comment, and McCain said that “…he was unaware of The Biden Experiment, but he was sad to see this program not get future funding…at least for the next two weeks.”

Kevin Jackson is an author of four books in sales and politics, as well being the author of The Black Sphere blog. He has been published in Africa News and Hoovers. Visit Kevin at http://theblacksphere.blogspot.com or email him at [email protected]
The Black Sphere online magazine is at www.openzine.com/theblacksphere, and you can catch Kevin on The Black Sphere radio show every Thurs 9P-11P Central (times subject to change) http://blogtalkradio.com/TheBlackSphere
Facebook Twitter
Kevin JacksonOctober 22, 2008
3 minutes read
Don’t Miss Out!