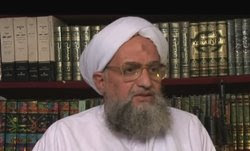 I normally don’t find myself agreeing with terrorists, however I have to agree with Ayman al-Zawahiri, in his depiction of Obama as a “house Negro”. As I have written recently, I find all the moves Obama is making reminiscent of the 3rd Clinton term. So I deem Obama’s term “Black Power with White Supervision.”

On O’Reilly tonight Sharpton denounced al-Zawahiri for calling president-elect Obama a “house Negro”. Yet it was Al Sharpton who in fact gave General and Secretary of State Colin Powell his battlefield demotion to “house Negro“. Since Powell subsequently endorsed Obama, perhaps Sharpton would like to retract the demotion, and reinstate Powell’s former rank of “field Negro”?

Now al-Zawahiri mentioned Secretary Powell and Condoleeza Rice as “house Negros” as well, so might we speculate that Powell’s demotion could have influenced Obama’s demotion in the Arab world? It is a theory worthy of consideration.

All this said, perhaps the real question is, “Why has the terrorist world turned its back on Obama, demoting him to ‘house Negro’?” Maybe they are upset at the amount of unaccounted monies they sent to Obama’s campaign, yet they are not properly represented in his cabinet? Obama is certainly pandering to other groups. Let’s take a look…

So we can all see why al-Zawahiri is a bit upset. However, I have it from Washington insiders that negotiations are underway to fill at least one cabinet post with a terrorist. The short list of candidates is as follows:

Kevin Jackson is an author of four books in sales and politics, as well being the author of The Black Sphere blog. He has been published in Africa News and Hoovers. Visit Kevin at http://theblacksphere.blogspot.com or email him at [email protected]
The Black Sphere online magazine is at www.openzine.com/theblacksphere, and you can catch Kevin on The Black Sphere radio show every Thurs 9P-11P Central (times subject to change) http://blogtalkradio.com/TheBlackSphere
Facebook Twitter
Kevin JacksonNovember 21, 2008
2 minutes read