President-elect Obama said his “adieu” to the Senate yesterday. The irony is that if Obama’s departure from the Senate had been because he was going to get a regular job for instance, this story would have “page 14” of some suburban Chicago paper. Because as we all know, Obama did nothing significant during his tenure in the Senate.

People…correction: “Stupid people” are making comparisons to Obama inheriting an America that is comparable to that of President Lincoln’s, a great American and Republican. I absolutely positively call BS on this!

A recent AP story makes a Lincolnesque reference to Obama being

“another son of Illinois who had left for Washington, a greater man who spoke to a nation far more divided.”

“… and like Lincoln, I ask for your support, your prayers, and for us to “`confidently hope that all will yet be well.'”

I find it interesting that Obama continually wants to be compared to a Republican president, when the only thing they really share is the state that they represented in the Senate. And Lincoln was born in Illiois, while everybody knows that Obama was born in Kenya. I wonder if they had the same trouble getting Lincoln to produce his birth certificate, as we are having getting a “look-see” at Barry’s?

But I won’t come down too hard on this young Kenyan king for wanting to “right” his “left“. Good for him. Perhaps he has seen the error of his ways? Doubtful. Remember, he is the smartest president ever, according to the Liberals. I guess he is referencing a great Republican president, because Lord knows he doesn’t have any good Democrat role models…look it up!

What does bother me is this idea of a “civil war” that is brewing within America. Why? Because I actually concede there is a civil war brewing in America. However, it is a war created by Obama and the Liberals!

Obama, the so-called “uniter” has been the most polarizing agent of change that I have seen in my lifetime. The obvious battles are Blacks against Whites, and rich against poor. But there are other battles waging, the newest of which is Blacks against Gays. Personally, I am thrilled to see the fratricide happening inside the Liberal ranks. This battle has the potential to become a war, and the spoils of this war will undoubtedly help the Conservative movement, I predict. Will there be backlash from Gays against the church? Sure. But what else is new. But the real battle will wage, Black against Gay, and Gay against Black. Get your popcorn, Conservatives!

In this last election, Obama unwittingly tipped the simmering hot cauldron that had been at equilibrium waiting for a catalyst. You see the boiling issues of the civil rights movement for Blacks and the ‘marriage’ rights of Gays and Lesbians has been a backroom discussion…until now. 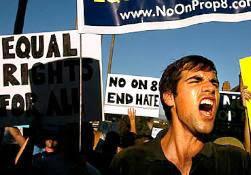 The collision of the presidential election and Prop 8 brought the discussion from the living rooms of Black and Gay Americans and put it on “Front Street”, as Blacks say. But it’s a debate that the Gays simply can not win, as I said in a previous blog entitled “‘Blacklash’ Against Gays“. And Gays will likely find that Blacks are highly protective of their fight for civil rights, and so are Gay Blacks. It’s one thing to lose a job, but it’s a whole other to lose one’s dignity.

So perhaps Obama is more Lincolnesque than I am giving him credit? Ok, I admit laughing at the absurdity of that comment as I wrote it. Nevertheless, even if by accident Obama has gotten Blacks to look more introspectively, maybe they will conclude that they are indeed Conservatives. And if we really get lucky, they will no longer vote, “…based on the color of one’s skin, but by the content of their character“. This lesson goes for you Gays too!

Kevin Jackson is an author of four books in sales and politics, as well being the author of The Black Sphere blog. He has been published in Africa News and Hoovers. Visit Kevin at http://theblacksphere.blogspot.com or email him at [email protected]
The Black Sphere online magazine is at www.openzine.com/theblacksphere, and you can catch Kevin on The Black Sphere radio show every Thurs 9P-11P Central (times subject to change) http://blogtalkradio.com/TheBlackSphere
Facebook Twitter
Kevin JacksonNovember 16, 2008
3 minutes read
Don’t Miss Out!