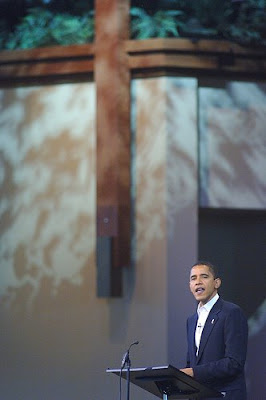 In the wake of the Trinity United church controversy, the Obama’s began attending the Apostolic Church of God, 6320 Dorchester Ave, however it doesn’t appear that they are going that often. If their charitable contributions are any indication, the church won’t miss them that much.

“President-elect Barack Obama has yet to attend church services since winning the White House earlier this month, a departure from the example of his two immediate predecessors,” and he has indeed elected to play basketball.”

Asked about the president-elect’s decision to not attend church, a transition aide noted that the Obamas valued their faith experience in Chicago, but were concerned about the impact their large retinue may have on other parishioners. The aid went on to further say,

“Because they have a great deal of respect for places of worship, they do not want to draw unwelcome or inappropriate attention to a church not used to the attention their attendance would draw.”

Well attention indeed, because Obama’s attendance in the church might confuse the faithful into believing that the rapture is at hand. Remember, the media told us that Obama is “the second coming“. Praise Jesus!

So as the article went on to say, Obama chooses to find religious solace in the basketball gym. Missing Sunday service must pain him dearly, devout Muslim…oops I mean Christian that he is. The sacrifice he makes for us evangelicals.

Fear not America. The president-elect has a crack staff to make his decisions for him. They afford him the leisure of shooting hoops in the name of the LAWD. Can I get a witness? [towel wipe] Hallelujah!

Yes, the appointment of all the Clinton cronies and other Washington retreads has afforded the president-elect more time than he anticipated. Translated: With Billary in for their 3rd term, he just needs to show up at press conferences and look “presidential”.

Now please don’t consider me a right-wing neocon cracker spewing inflammatory rhetoric and creating trouble for our new leader. I will leave that to the experts on the other side of the color line, namely Sharpton and Jackson. They have the time now.

Nevertheless, what troubles me is that The Messiah apparently feels that he no longer needs the evangelicals now that the election is over. And I thought the marginalization of the Black vote by White politicians was the height of hypocrisy. But Obama pimped Gentiles, Jews, and yes…Muslims too!

With a firm spiritual base that one gets on the basketball court, it’s no wonder why he supports partial birth abortion and teaching sex education to 2nd-graders. Who’s got next game?

Kevin Jackson is an author of four books in sales and politics, as well being the author of The Black Sphere blog. He has been published in Africa News and Hoovers. Visit Kevin at http://theblacksphere.blogspot.com or email him at [email protected]
The Black Sphere online magazine is at www.openzine.com/theblacksphere, and you can catch Kevin on The Black Sphere radio show every Thurs 9P-11P Central (times subject to change) http://blogtalkradio.com/TheBlackSphere
Facebook Twitter
Kevin JacksonNovember 27, 2008
2 minutes read
Don’t Miss Out!