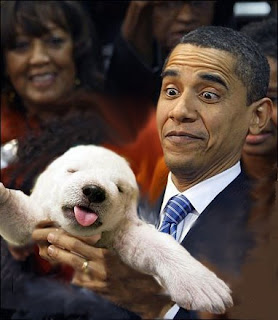 This is the first in a three-part series on Abortion. I will be joined by Lisa Brinks, Wake Up Conservatives! on the left column. Lisa will be writing Part II.

Part I – The Issue of Abortion in Bizarro World

A newborn puppy is found abandoned on the street in Hollywood, an obvious attempt of somebody to get rid of it. A passerby sees the puppy moving the blanket in which it was wrapped, and decides to take a look.

People begin to gather around, until finally there are quite a few onlookers, including celebrities and paparazzi. Finally one male onlooker says, “Let’s kill it to put it out of its misery. Obviously the mother didn’t want it“.

PETA, the ASPCA, Ellen, Rosie, Whoopi, “Liberated women” from all over America, and finally the ACLU all come to the aid of the puppy, attacking the man for wanting to kill an innocent puppy. “How could you do something so cruel, and to something so helpless?“, they yell. Feeling threatened, the man runs for his life.

Just then the presidential limo pulls up, and president Obama gets out. He inquires about all the commotion. Obama seizes the opportunity for the “bigger picture”, and begins to opine.

“It’s a tragedy what has been done to this puppy. [cheers] The idea that its mother would abandon it, in a sense aborting its right to a happy life is uh, a tragedy. But we can’t blame the mother. [cheers] No. [cheers] Listen to me now. She was forced to this terrible choice, because of eight years of the failed Bush administration policies. [cheers] No, it’s not her fault.

Well this puppy will have a chance at life. Because I am a beacon to America and the world, and I will provide a ray of hope and change for this puppy. [cheers] So I will adopt this puppy, and he will be the new White House pet.”

There is worldwide media hysteria and the headlines the next day read, “POTUS Saves Puppy“. People around the world rejoice. The Messiah has shown his grace to the puppy. What a lucky puppy it is.

Asked what he would name the puppy, Obama replies “…in response to America’s commitment to poverty, I am naming the presidential pet ‘FeedUs’“.

The media is abuzz, and begins to explain to the public how magnanimous Obama was in adopting the puppy, but now he has transcended sainthood, and gone directly to god status by bringing attention to the issue of world hunger.

The next day papers around the world read, “POTUS Saves Fetus“.

Such is Bizarro World, where the leader of our country would rather save a puppy, than save a human baby. Let’s recall Obama’s comments on a child surviving an attempted abortion: “Why should she [the woman] be burdened with it [the baby]?”

Welcome to Bizarro World, aka ObamaNation!

Kevin Jackson is an author of four books in sales and politics, as well being the author of The Black Sphere blog. He has been published in Africa News and Hoovers. Visit Kevin at http://theblacksphere.blogspot.com or email him at [email protected]
The Black Sphere online magazine is at www.openzine.com/theblacksphere, and you can catch Kevin on The Black Sphere radio show every Thurs 9P-11P Central (times subject to change) http://blogtalkradio.com/TheBlackSphere
Facebook Twitter
Kevin JacksonNovember 25, 2008
2 minutes read