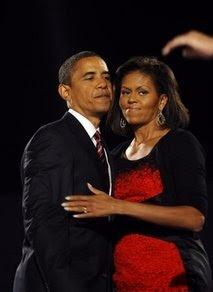 There was a lot of buzz recently about Michelle’s dress on the day that Barry became president-elect. I heard them say things like,

“Instead, Tuesday night’s dress–with its “Star Trek”-like molecular burst on the front (“Beam me up, Barack”) and crisscross sash–comes hot off the spring 2009 runway collection of Narciso Rodriguez, one of the most critically acclaimed of New York’s Fashion Week.

Unfortunately, two key tweaks to the runway version of the dress, presumably made to take it from cocktail-sexy to first-ladylike, disrupted its intentions and architecture.”

I find that description completely wrong, though I don’t claim to be a fashionista. And since I am no journalist either, just an engineer turned salesguy, I wanted to be deferential to the real media, allowing them to make the connection that was evident to me, as soon as Michelle hit the spotlight. But the media never got it.

Well I have waited long enough for the so-called media to figure out what they were missing. Their “miss” reinforced my belief that in this election cycle, that I have witnessed the death of journalism. Yes, the bones of journalism were picked clean by vultures disguising themselves as “news outlets”. And those bones were thrown under the bus to greet Granny and Uncle Jeremiah! 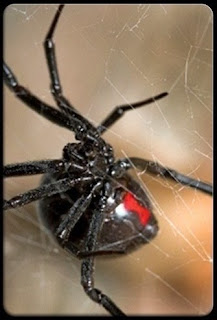 So in the spirit of The Black Sphere providing that necessary point of light so that there can be an awakening, I have drawn my own conclusions about the dress, pictured thus. Voila! You be the judge!

Now as you view the picture of Michelle, [she is the one pictured above], note the look in her eyes and its uncanny resemblance with the “test subject” pictured on the right.

Further, both ladies are bearing their underbellies, as if mocking one another for wearing the same dress, perhaps some unspoken challenge?

You should also note the tense body-language of the president-elect, he seemingly pulling away, eye-contact in a completely different direction. Was he signaling the secret service?

Ah ah, don’t be too quick to dismiss. If you look closely, you will notice the eerie hand pointing directly at Michelle, as if to say, “Her”?

Kevin Jackson is an author of four books in sales and politics, as well being the author of The Black Sphere blog. He has been published in Africa News and Hoovers. Visit Kevin at http://theblacksphere.blogspot.com or email him at [email protected]
The Black Sphere online magazine is at www.openzine.com/theblacksphere, and you can catch Kevin on The Black Sphere radio show every Thurs 9P-11P Central (times subject to change) http://blogtalkradio.com/TheBlackSphere
Facebook Twitter
Kevin JacksonNovember 8, 2008
2 minutes read
Don’t Miss Out!