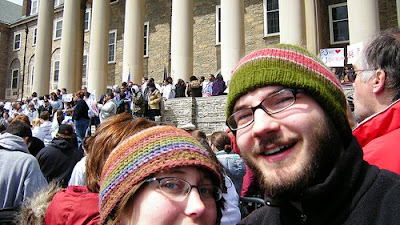 By now, many of you have seen the post-election interview of Obama supporters, where they are asked twelve questions, and essentially proved that they know nothing about real political issues. I file this under “Duh”!

It is a fact that the Conservative voter is much smarter than the average Liberal voter. To what degree is up for debate, but in my own personal analysis of Conservatives to Liberals, I would say it is akin to comparing humans to chimpanzees. Close in DNA, but don’t let the chimps watch the kids!

And if you have seen the video of how any perceived issues against McCain/Palin were “front and center”, while the gaffs of Obama Bin Biden were simply ignored, then you likely get an understanding of how marketing, aka “the media” works.

It was the media who got John McCain the Republican nomination in fact. Why? Because they knew that he would not win. They knew they could convince McCain that they were his friend, the same way Brutus was a friend of Caesar…et tu, Brute!

History has proven how Liberal America treats its wounded veterans attempting to seek the highest office in the land. Remember how people made fun of Bob Dole’s inability to lift one of his arms? An injury he received while fighting for this country. And McCain was brutally beaten in a POW camp, having his arms and shoulders broken to the point where he can now barely use them. But instead of his battered body being a badge of honor for Americans, a testament to American will, the media joked that McCain was a technological stooge, unable to do something as easy as typing an email. We would learn that it is painful for McCain to lift his arms to type. Too bad Dole can’t lift that arm high enough to give Liberal America the finger, and that McCain can’t lift his arms enough to choke the crap out of them.

Liberal Americans are like little schoolyard menaces, who can’t wait to poke fun at the kid with the limp, not knowing that the kid got that limp savings the life of a friend. But they like the nerd who has the Blackberry.

Kevin Jackson is an author of four books in sales and politics, as well being the author of The Black Sphere blog. He has been published in Africa News and Hoovers. Visit Kevin at http://theblacksphere.blogspot.com or email him at [email protected]
The Black Sphere online magazine is at www.openzine.com/theblacksphere, and you can catch Kevin on The Black Sphere radio show every Thurs 9P-11P Central (times subject to change) http://blogtalkradio.com/TheBlackSphere
Facebook Twitter
Kevin JacksonNovember 19, 2008
2 minutes read
Don’t Miss Out!