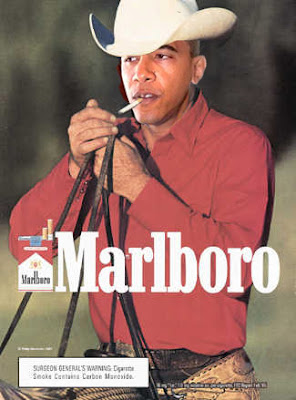 In what should have been just a routine answer of “No”, to a very basic question, we were treated to ObamaSpeak. [See Video Bar] Asked simply by Tom Brokaw in an interview on “Meet the Press”, “Have you quit smoking?”, here is what Barry “You know I’m lying because my lips are moving” Obama said:

“I have. Smiling broadly. “What I said was that there are times where I have fallen off the wagon.”

Brokaw interrupted, “Wait a minute. That means you haven’t stopped.”

“Fair enough,” Obama said. “What I would say is that I have done a terrific job under the circumstances of making myself much healthier. You will not see any violations of these rules in the White House.”

Now typically, who cares whether the man smokes. Frankly I’m glad he does. But what I find incredulous is just his inability to speak the truth.

Step 2: Compliment the questioner on catching you in a lie by saying, “fair enough“.

“I have done a terrific job…much healthier” Blah blah blah. It’s no wonder this guy believes he is capable of being president, because he can spin anything, including his lack of a resume or substance.

I just find it amazing, actually frustrating that this man can not admit wrong. While the rest of us recognize that we can indeed be wrong, I am willing to bet that America will never hear Obama admit to being wrong.

Obama has run another red flag up the flag pole by his inability to just answer a question directly.

Kevin Jackson is an author of four books in sales and politics, as well being the author of The Black Sphere blog. He has been published in Africa News and Hoovers. Visit Kevin at http://theblacksphere.blogspot.com or email him at [email protected]
The Black Sphere online magazine is at www.openzine.com/theblacksphere, and you can catch Kevin on The Black Sphere radio show every Thurs 9P-11P Central (times subject to change) http://blogtalkradio.com/TheBlackSphere
Facebook Twitter
Kevin JacksonDecember 8, 2008
1 minute read