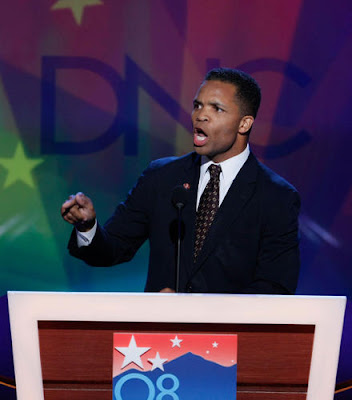 So today we find out that Candidate #5 is Jesse Jackson, Jr. I’m not surprised, though I reserve my opinion of Jackson Jr. Nevertheless, I will provide some insight into the rough and tumble politics of Chicago, IL.
Recall that Jackson took over the vacated seat of Representative Mel Reynolds, the IL Congressman who was convicted of sleeping with his 16-year old campaign volunteer. His problems began in 1992, but the cake didn’t hit the fan until late 1994, and ultimately in 1995, when he finally was convicted.

What most people don’t know is only months before the prosecution of Mel Reynolds, Jackson Jr and his wife Sandra transferred their official residence to Chicago from Washington. And once it was clear that Reynolds was persona non grata, the IL machine started against him, specifically Jackson Sr. They did a “Joe the Plumber” on Reynolds to make sure that he wouldn’t pull a Blagojevichesque move and attempt to keep his seat.

Reynolds’ unceremonious departure from Congress marked the beginning of the healing that Jackson Sr was to do with the Clintons, since Clinton would need Jackson Sr in his 1996 election bid. And for his support Jackson Sr would later be “gifted” with Africa, and the Clintons would throw their support behind Jackson Jr.

If you read my blogs you may recall where I reported that Clinton had one of the worst policies for Africa for modern-day presidents, and Jackson Sr was a big reason for Clinton’s failures. In fact Jackson is credited with contributing to the deaths of over 300,000 Africans. Jackson Jr’s record is not too bad, as he is a popular congressman in South Chicago, with his most notable pursuit to get an airport built for that area of the city.

Jackson Jr does live a much different life than he did in Washington, where he had a one-bedroom apartment that he later expanded. He became good friends with August Busch IV, and was given an A-B distributorship a few years back. For those of you who don’t know, I will tell you that given the choice between printing money or owning an A-B distributorship, I would take the latter. It’s better than printing money!

So here’s the wrap:

I don’t know if Jackson Jr did anything wrong. He likely believes that he is the best senate candidate, though he is as Liberal as Obama in many respects. But the good news for Republicans is that the strongest Democrat candidates for this seat are tainted, and the governor has been neutered. So if we take advantage of this situation, we might be able to get another senate seat.

Oh, here’s the rest of the story. Clinton would later pardon Reynolds. Upon his release from prison, Jackson Sr hired him as his Prison Outreach Advisor, the first time in the history that either thing occurred.  Given the scandals that would later touch both Jackson and Clinton, are we surprised?  Like I said, Liberals make great zoo animals!

Kevin Jackson is an author of four books in sales and politics, as well being the author of The Black Sphere blog. He has been published in Africa News and Hoovers. Visit Kevin at http://theblacksphere.blogspot.com or email him at [email protected]
The Black Sphere online magazine is at www.openzine.com/theblacksphere, and you can catch Kevin on The Black Sphere radio show every Thurs 9P-11P Central (times subject to change) http://blogtalkradio.com/TheBlackSphere
Facebook Twitter
Kevin JacksonDecember 10, 2008
2 minutes read
Don’t Miss Out!