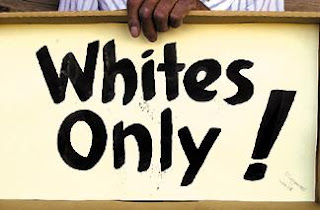 Just when the senate has become the “No Blacks Club” again,  Blagojevich the Barterer nominates a Black man to fill the previous position previously held by a half-Black man. You know, the one that Whites find “less threatening“.

Now the media will say that this is about Blagojevich’s ability or inability, take your pick, to appoint a senator since he is under investigation. But for liberals, scandals like Blagojevich’s are just business as usual. So you have to look deeper, which is why you’ve visited The Black Sphere.

Historically liberals do exactly what Blagojevich is doing when they are overwhelmingly guilty. They return to work and act as if nothing has happened, as I reported in a very under-read [hint] blog titled Political Affirmative Action.

If Blagojevich waits it out long enough, and can just survive, then the public will likely forget about this little indiscretion of attempting to sell the vacated senate seat. Eventually the media will push the story to page 16 of the D section, and voila, all is well in the universe. Since Blago is “innocent until…”, let’s just run with Burris as the new senate appointment, in order to understand the issues.

Outside of being a liberal, Burris is certainly qualified for the job. Juris Doctorate from Howard. And as Comptroller of Illinois from 1979 to 1991, Burris was the first Black elected to a statewide office in Illinois. Burris would later serve as Attorney General for Illinois from 1991 to 1995, and then run a successful consulting company, which he still owns today.

So if you were forced to select a liberal for the senate (and we are), surely this liberal is better than most. But the Pied Piper of Racist Pimping ain’t having it.

Is Obama finally embracing his White heritage in partnering with Harry Reid to block the nomination of Burris, a “qualified” full-Black man? Perhaps he is jealous that Burris actually has a track record? Maybe Burris’ role as COO for Operation PUSH and his ties to Jesse Jackson disturbs Obama? As a Jackson operative, Burris could help Jackson deliver on that threat to “cut his [Obama’s] nuts off], as I documented in Black on Black Crime?

Burris had unsuccessful runs for the senate, governor, and mayor of Illinois, and here he is at the cusp of a senate appointment, an appointment over which Obama has no influence?

Maybe Obama feels that if Burris can’t rig an election to win it, then he doesn’t deserve a senate seat? He would have a point…

As for Harry “Bull Connor” Reid, I have suspected that he, like most Democrats is simply invoking his rights as a card-carrying racist. Let’s not forget that Democrats have sponsored every piece of legislation to prevent Blacks from voting and to dehumanize Black people in the history of America.

So Reid’s agenda is clear to this Black man: Blacks can be “House Negros”, but not “Senate Negros”.  At least not full Blacks.

So this is just more of the Democrats’ racist agenda surfacing, in this writer’s humble opinion. “Bull” Reid can handle the senate being 0.5% Black, but damnit if he will allow it to go to 1% Black. There have only been 2.5 Blacks in the senate since Reconstruction.  Hmmm…

Quotas do have their limits, when it comes to Democrats. Give a Black man 1%, and he might ask for his actual population percentage of 12%! Next thing you know the Mexicans will be asking for their fair share, and they will want illegals included. Add the Asians, and it’s a slippery slope where you end up with a United States Senate that looks like the actual makeup of America! For Democrats, that would be an abomination!

“The rumor of my demise has been greatly exaggerated.” – Race Card

Kevin Jackson is an author of four books in sales and politics, as well being the author of The Black Sphere blog. He has been published in Africa News and Hoovers. Visit Kevin at http://theblacksphere.blogspot.com or email him at [email protected]
The Black Sphere online magazine is at www.openzine.com/theblacksphere, and you can catch Kevin on The Black Sphere radio show every Thurs 9P-11P Central (times subject to change) http://blogtalkradio.com/TheBlackSphere
Facebook Twitter
Kevin JacksonDecember 31, 2008
3 minutes read

The Frightening Story Of The Village Of Portlock Alaska…Was A Killer Sasquatch Responsible ?
Great American Outdoors
SCOTUS Saves Leftist Women from Themselves
The Black Sphere