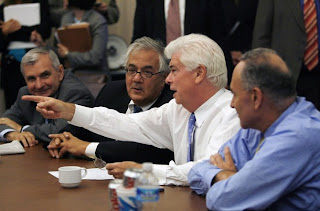 The democrats have managed to sweep their part, the major part, of the financial crisis almost completely under the rug. And it nobody is calling them out on this. I know that O’Reilly and Frank had a heated exchange, and there have been some people blogging about this…big whoop. But I haven’t seen anybody really holding these scoundrels accountable. Til now…

What should happen to Congressmen who take bribes – let’s just call them what they are, allow the management teams of GSEs to take millions of dollars in golden parachutes, bilk the taxpayers out of billions in wasted funding, then drive the economy into the toilet? I say they should be impeached. Yet they haven’t had so much as a wrist slap. Hmmm…

Meanwhile, Congress parades the pathetic Big Three automakers CEOs around Capitol Hill on leashes, wearing neck collars and leather thongs. Then they have them do their circus act and beg for money publicly, and from people, most of whom have never had the responsibility of a payroll in their lives, and most wards of the government, welfare recipients on a much grander scale.

The added insult to these soon-to-be government minions, dare I say slave CEOs is now the Democrats in Congress want to appoint a Car Czar over them, all in an effort to preserve the “little u” union. What kind of czar should we appoint over Congress, is what I would like to know?

The Democrats in Congress will try to act “stupid” on this issue…method acting of course. And it’s because they are stupid. They are stupid if they think that we can’t connect the dots between the campaign contributions, not limited to Frank and Dodd, and the buying of their influence by Fannie and Freddie. Do they think we are stupid enough to miss their squandering billions of taxpayer money, all leading to what could be the biggest financial crisis, second only to The Great Depression? Sure they do, because they live in Bizarro World.

So here is the contribution list from Fannie and Freddie in order of amounts paid:

Consider that Franklin Raines, the chief benefactor and ex-CEO of Fannie Mae and Obama campaign advisor received over $90M for his donations, and you can come to only one logical conclusion. These Congressmen sold us out for peanuts, walking around money, “chump change“, pardon the pun. Not that I’m condoning bribery, but Dems don’t sell us out so cheaply. I don’t know about you, but I feel like a $2 whore on nickel night?

We continue connecting the dots continue with the video from 2004 on congressional meetings (see video on left column of the blog), where Republicans were asking the tough questions around Fannie and Freddie. They were requesting oversight on these organizations, and an accounting of the money. It is blatantly evident from these hearings that there were some shenanigans going on, and the word “collusion” comes to mind. And I promise you, I’m no conspiracy theory wacko, just observant.

The reason I believe the Democrats were in cahoots is because the Republicans’ arguments all made sense. Yet the Democrats’ responses were like listening to Mafioso wiretaps, “…Yeah so you want me to do dat ting? You know, for dat friend of ours.” The Democrats spoke in “code” and “cya”. The agenda was obvious. There was not going to be any oversight of Fannie and Freddie, if the Democrats had anything to do with it.

And unlike the Big Three CEOs who have allowed the unions to run their companies into the ground, the Democrats are non-repentant, and in fact, cocky. So much so that despite public outcry against the auto industry bailout, they have said “screw you”, as I predicted, and are attempting to cram that down the throat of America. They are daring us to do something, I believe.

Well my grandmother didn’t raise “prison booty“, so I say let’s look under the rug for this dirt, and let’s hold these scoundrels accountable. Lord knows, if there was a Republican to fry, the Democrats would be having another public cook-off, just like the one for the Big Three auto execs. But this scandal is a scandal of Democrat creation, and like most wild animals, Democrats rarely eat their own, except in dire circumstances.

So let’s give them those circumstances, by holding them to the same standards they would hold a Republican. Liberals are not bulletproof just because most lack morals, have no standards, and do not believe they are accountable.

Let’s begin the holidays with the gift of congressional seats for the Republicans, and yet another scandal for the Democrats. And as Tony Montana would say, “Let’s shine the light on these cocka-roaches“.

Kevin Jackson is an author of four books in sales and politics, as well being the author of The Black Sphere blog. He has been published in Africa News and Hoovers. Visit Kevin at http://theblacksphere.blogspot.com or email him at [email protected]
The Black Sphere online magazine is at www.openzine.com/theblacksphere, and you can catch Kevin on The Black Sphere radio show every Thurs 9P-11P Central (times subject to change) http://blogtalkradio.com/TheBlackSphere
Facebook Twitter
Kevin JacksonDecember 11, 2008
4 minutes read
Don’t Miss Out!