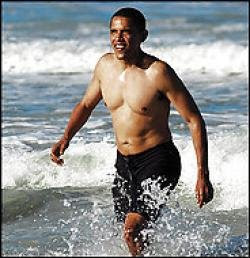 The media has been on vacation with Obama, actually since the “invention” of Obama. The recent hard hitting “news” is that Obama returned to the gym the other day, where we are told he has been every day except one.

Based on those pictures I saw at the beach, I hope he’s working on his pecs. My God, slap a B-cup bra on that man to keep those things from sagging. Didn’t anybody tell him that 40 is supposed to be the new 30?

Now of course our media tried to convince us that Obama is a hunk. Right…chicken legs and all. Then they got the liberals outraged that pictures were taken of Obama on the beach, inquiring how photographers were able to get that close.

But as my granny told me, “The same thing that can make you can break you“. And this same media that has worshipped at the Altar of ObamaNation is now becoming a bother. It has become so ridiculous that we are being told that Obama was out with his kids, and they had rocky-road ice cream. And why is this news? 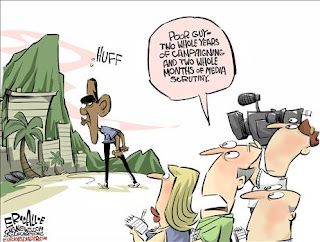 You want to know why TV stars and rock stars end up in rehab? The media. Many can’t handle the gap between what they know about themselves and what they read or hear on a daily basis. It is difficult to live up to the reputation that the media can create for you. And they created Obama the rock star.

But Obama is a rock star with no musical talent. Heck he doesn’t even appear to play “air guitar“. He’s a baller, but he can’t make the NBA, and he would get dusted if he tried to play street ball at Rucker. He wants us all to learn Spanish, but he doesn’t speak a 2nd language. He can’t sing, he can’t dance.  He just talks! And uh, uh, not that well.

You see, there is the persona of Obama, the media-created Messiah archetype, sent to cure all the ills of a sick America. Then there is the reality, which is Obama is really the village idiot, whose only real talent is his ability to move his mouth better than a $1500 an hour call girl.

My point? I think that Obama might become the fourth kid from “Diff’rent Strokes” in his tenure as POTUS. “What chu talkin’ bout Willis?”

The world is watching. Yes, even for things as mundane as taking your kids to get an ice cream is captured on film and analyzed. The way he walks, how long he was there, how the kids acted, and so on. Cameras are always running and microphones hot, as this the Politico.com article suggests:

And even though the pool photographers remained out of sight and without an image of these private moments, Obama seems to be tiring of the journalists who have followed him daily since the campaign.

“OK, guys, come on,” Obama said last Sunday, looking toward photographers clicking away as he warmed up before a round of golf. “How many shots do you need?”

It’s been a progression. And Obama’s frustration shows in waves.

On Halloween, Obama grew testy with a Polish media crew as he took his daughter Sasha to a party at his campaign treasurer Marty Nesbitt’s Chicago home.

“All right guys. That’s enough. You’ve got a shot. Leave us alone. Come on guys. Get back on the bus,” Obama said before breaking into a trot with Sasha still holding his hand.

And those are the small problems that Obama will deal with. All those inane policies won’t just be in the myopia of Illinois, or in some venue full of ObamaBots. They will be exposed to the scrutiny of the world. And not everyone is an ObamaTron, hypnotized by Obama’s doubletalk.

And guys like Obama have a difficult time dealing with people who don’t buy into their fluff. They need to sell the fluff, like a heroin addict needs a fix. People like Obama have an intense need to convince everybody that they are “good guys”.

They find criticism particularly harsh, and want to correct things, fix things quickly. This is why they don’t make good leaders. They can’t follow their true heart, as their “leadership” has been built on consensus, and they have no real core. So they over-react. And the real media shows up, looking for the blue dress.

You see, the media can’t keep reporting about Obama and his kids having ice cream or getting back in the gym, and sell papers. As liberal as the mainstream media is, they realize that even they will lose their zombies if they don’t throw them some raw meat every now and then. Zombies gotta eat. Problem: No Republicans to butcher.

I say, let’s wait and see how much grey hair he has and let’s do a wrinkle count after two years, when the stress of running this great country has set in. We will see how the media is treating him, when Black starts to crack, and his policies have the country in turmoil. Eventually the media will have to end vacation and get back to work.  Cause telling us about flavors of ice cream for four years won’t sell papers!

Kevin Jackson is an author of four books in sales and politics, as well being the author of The Black Sphere blog. He has been published in Africa News and Hoovers. Visit Kevin at http://theblacksphere.blogspot.com or email him at [email protected]
The Black Sphere online magazine is at www.openzine.com/theblacksphere, and you can catch Kevin on The Black Sphere radio show every Thurs 9P-11P Central (times subject to change) http://blogtalkradio.com/TheBlackSphere
Facebook Twitter
Kevin JacksonDecember 31, 2008
4 minutes read