The economy needs a healing, and who better to “lay hands upon it“, than Barack ‘The Messiah‘ Obama. And that is exactly what the Democrats are requesting according to an AP article titled “Democrats: Obama need hands-on economic approach“. 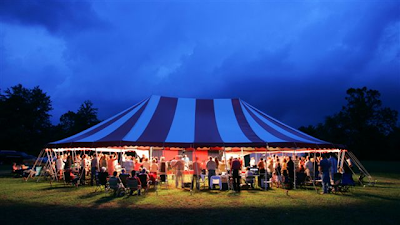 When I read that, I felt like I was at one of those small town revivals, where the traveling

evangelist sets up a tent at the outskirts of town, and the word gets out that “there’s gonna be a healin’ tonight“.

“[Obama’s] going to have to be more assertive than he’s been.”

So the Democrats set up the tent, but the “healer” didn’t show, now they are panicked. And they are growing impatient with the Anointed One, since he has not taken center stage. 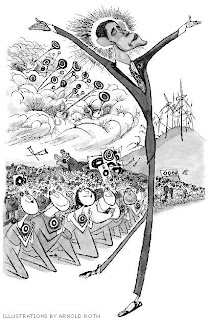 Franks goes on to chide Obama to “take over” as president. Sen. Christopher Dodd, chairman of the Senate Banking Committee and one of the lead negotiators in the auto industry bailout, said

“The Obama team has to step up…In the minds of the people, this is the Obama administration. I don’t think we can wait until January 20.”

Maybe they just could get Ludicris and some of his boys to do a drive-by on W, so he will get the message? Personally I prefer to wait the 46 days for socialism myself.

So we have comments from the two senators who were a major part of the financial meltdown we find ourselves in today, asking for the third most complicit ex-senator, yes the Messiah to involve himself in yet another potential scandal. “Why hast The Messiah not laid hands on the economy, and thus forsaken the Democrats, your chosen people?”, wonder Frank and Dodd.

Simple answer: Lord Obama is popular and the Democratic Congress is not. As I blogged earlier in Liberal Trickeration, the Democrats thought they could ram this next bailout package through Congress, while their popularity is low, and Obama would bail them out with the welfare checks…excuse me, “stimulus” checks, as soon as he was sworn in. And this was a good strategy for a while. So what changed?

Liberals voters figured out that while they have been promised $1500 “stimulus” checks, they can extort the Fed for much more than this. Do the math. $1.4T for 40M people. There’s a

staggering $350K for each unproductive Liberal in America. The government could actually give this money out to Liberals who don’t pay taxes, and stimulate the economy, and don’t think it hasn’t been discussed. Liberals know there is more there for them, and they are willing to wait it out, because they know that the Liberal Congress is a motivated seller.

So back to the question of why Obama is forsaking his people, and is not actively helping them pass the next bailout bill? Two reasons:

So what’s a Saviour to do? How will The Messiah take a loaf of bread and feed 40 million people? According to the article, he is side-stepping; letting Bush run things for now. Translated: He allows somebody else to feed them, like any good socialist.

“”Until Secretary Paulson indicates publicly that he’s drawing down the second tranche, the second half of the TARP money, it would be speculation on my part to suggest that that money’s going to be used up,” he told reporters at a Chicago news conference Wednesday.

Obama did stress that a significant component of the fund should be used to reduce the number of foreclosures. But he did not specify a particular remedy.

He also declined to take a stand in a debate over the source of money for an auto loan package. The dispute has divided Democrats and hindered progress on assistance for the industry. At issue is whether to take money from the $700 billion designated for the financial sector or to take it from a previously approved loan aimed at manufacturing more energy efficient cars.

“I think it’s premature to get into that issue,” Obama said at the conference.”

Well that’s not very “omnipotent” of him, is it?

Obama’s timing is excellent, because he gets to ride things out, and let the Texas cowboy make the difficult decisions. Remember tough decisions are “above his pay grade”.

Whether Bush fights or supports Congress on bailouts, Obama will just do nothing, something he is passionate about. He can take credit if it turns out good, or he can pass blame due to factors beyond his control. One thing Obama knows is politicians love goat…and scapegoat makes good barbeque.

After Jan 20, Obama will finally show up at the revival tent, appearing contemplative and resolute. He will sermonize, pontificate, and speechify, discussing all our options for the economy. He will spot our frail economy sitting in the crowd in a wheelchair, wearing an oxygen mask.

Barney Frank and Chris Dodd will wheel the economy to the stage. Obama will have Frank and Dodd stand the economy stand on its shaky little legs. He will motion for them to remove the wheelchair.

The world will watch as Obama grips the economy around the face with the palm of his large Kenyan hand. The economy will slump for a moment. But then miraculously, the economy will recover and walk without the aid of the wheelchair. We will have witnessed the healing of the economy…a miracle!  Or so it seems.

And after all the Bible-toting, gun-clinging citizens have gone home, the able-bodied economy, the Democrats and Obama will all meet behind the tent to congratulate each other for another successful “scam”, count the money, and laugh at our stupid butts for believing in miracles…from politicians!

Such is the church of ObamaNation, where kool-aid and Communist…excuse me, Communion wafers are served.

Kevin Jackson is an author of four books in sales and politics, as well being the author of The Black Sphere blog. He has been published in Africa News and Hoovers. Visit Kevin at http://theblacksphere.blogspot.com or email him at [email protected]
The Black Sphere online magazine is at www.openzine.com/theblacksphere, and you can catch Kevin on The Black Sphere radio show every Thurs 9P-11P Central (times subject to change) http://blogtalkradio.com/TheBlackSphere
Facebook Twitter
Kevin JacksonDecember 5, 2008
5 minutes read