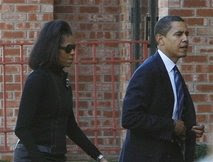 President-elect Obama didn’t find time to attend his grandmother’s funeral, nor has he even graced the inside of a church, since his election as POTUS. However he and Michelle found time to attend the funeral of…”the family member of a friend“, according to this AP report. I find this amazing.

The funeral was not even for his friend, Eric Whitaker, but for “the family member of a friend.” It makes you wonder what he owes that friend. What dirt must Eric Whitaker have on Obama to get him (1) off the basketball court, and (2) inside a Christian religious dwelling?

Maybe Whitaker has video of Obama’s birth in Kenya? Or pictures of him in compromising position(s) with his male friend, since people have accused him of being on the “down-low”, at least at one point?

Another interesting tidbit is the fact that reporters weren’t allowed into the funeral, apparently snubbed. Astounding that Obama is obviously feeling cocky enough to snub the people who got him elected. He probably figures that the media is like the Black vote…in the bag.  Silly Negros!

Finally the notion that reporter didn’t even try to find out who died is certainly worth mentioning. If Bush had tried this, they would be saying that the person who died had been shot by Cheney in a hunting accident, and they would have camped out, until they either got their answer or could create something.

Kevin Jackson is an author of four books in sales and politics, as well being the author of The Black Sphere blog. He has been published in Africa News and Hoovers. Visit Kevin at http://theblacksphere.blogspot.com or email him at [email protected]
The Black Sphere online magazine is at www.openzine.com/theblacksphere, and you can catch Kevin on The Black Sphere radio show every Thurs 9P-11P Central (times subject to change) http://blogtalkradio.com/TheBlackSphere
Facebook Twitter
Kevin JacksonDecember 1, 2008
1 minute read
Don’t Miss Out!