Part I – The Financial Crisis

How’s this for irony? The same guy who helped create the financial crisis is now in charge of getting us out of it! Yes Obama vows strong new financial regulations. Recall that Obama vows have a “good until” date on them, so be sure to find out when they expire, unless you like spoiled milk.

After Obama’s cronies at Fannie Mae and Freddie Mac have bilked the US taxpayers out of billions of dollars, he now wants to institute oversight on his watch. Nevermind that Bush and McCain pushed for oversight of these organizations as early as 2005, while Obama was receiving money from both organizations’ lobbyists. And nevermind that as an attorney Obama

was forcing mortgage companies to make these high risk loans under threat of extortion. But who am I to bring this up, particularly since the internet site has been likely been scrubbed?

In a discussion on Sunday, Obama said,

“We’ve got to have transparency, openness, fair dealing in our financial markets and that’s an area where I think over the last eight years we’ve fallen short.”

Yes, like the transparency we have had in knowing Obama’s citizenship, how he paid for college, his medical records, his relationship with terrorist, and so on.

And in typical Obama fashion, he ‘level sets‘ that things will “get worse, before they get better“. So there’s the old “get out of jail free

card”, that the media will be happy to redeem as the economy craters, and craters, and craters. Guess what the mantra will be, when Obama continues to fail? Eight years of the failed Bush policies is to blame. Because Lord Obama will never take blame, on that you can bet.

So what’s the socialist solution? Spend a fortune, as Obama’s taped comments on Meet the Press indicate he plans to do:

“”We can’t worry short term about the deficit … We’ve got to make sure the economic stimulus plan is large enough to get the economy moving,” he said.”

Don’t bother to hold on to your wallets unless you want to lose your hand as well, because Obama is going to just rip it right out of your back pocket. Obama and his type obviously believe that we have an endless supply of money, so just spend your way out of a crisis. This is what happens when you have never had to balance a real budget.

Nevertheless, I am taking Obama’s advice, so here is how I will fix financial deficits in my household. If I can’t pay the mortgage, screw it. I just go buy myself a Lexus and spend my way to good financial health.

And what is his actual plan for getting us out of this morass?

“Speaking at a news conference in Chicago, he said he was confident that if the right steps were taken in the coming months to get the economy back on track, “we can emerge leaner, meaner and ultimately more competitive and more prosperous”.” 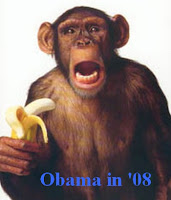 I love the way Obama says absolutely nothing, but wraps a bow around the ‘hopeful’ ending?

Brilliant! “If the right steps were taken, we can emerge…” And if a frog had wings, would he bust his ass jumping? Plan? Plan? We don’t need no stinkin’ plan!

Having Democrats in control of money is like having Chimpanzees babysitting your kids.

Kevin Jackson is an author of four books in sales and politics, as well being the author of The Black Sphere blog. He has been published in Africa News and Hoovers. Visit Kevin at http://theblacksphere.blogspot.com or email him at [email protected]
The Black Sphere online magazine is at www.openzine.com/theblacksphere, and you can catch Kevin on The Black Sphere radio show every Thurs 9P-11P Central (times subject to change) http://blogtalkradio.com/TheBlackSphere
Facebook Twitter
Kevin JacksonDecember 9, 2008
3 minutes read
Don’t Miss Out!