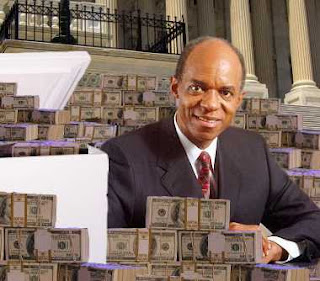 Don’t you just love it when you know exactly how many stupid people there are, and to the tenth percentile? Well in Louisiana, there are exactly 43.2% of the people who are certified stupid. Yes, this is the percentage of people who voted for William Jefferson, the nine-term Democratic representative from Louisiana, who had $90,000 in his freezer. He was accused of 16 criminal counts of racketeering, bribery, money laundering and obstruction of justice.

To be fair, like Jefferson, I like to keep my loot cool, so I freeze mine too. I like the way it keeps the bills nice and crisp. And with what Congress has been doing with my money, I think putting a literal “freeze” on spending was in order, don’t you?

My process is to bag my money in clear plastic. Then I use one of those gadgets to suck the air out of the bag, so my money doesn’t get freezer burn. Sucking the air out also makes my money easier to stack, those nice, little half-inch $10K bricks. Why freeze our money?

Blacks have a history of not trusting banks, so we have buried money, hidden it in walls of our homes, and other unique hiding places. And I’m sure that Jefferson, like me knows first-hand that there is no better feeling than going to get some food out of the freezer, only to be greeted by one’s money, just sitting there as if it were saying, “I got your back, Bro“.

So tucking away $90K for a rainy day is just what any good Liberal congressman not on the take would do. There are no shenanigans here, no smoking gun, no congressional seat for sale…just Liberalism as usual, and frankly good fiduciary responsibility in today’s volatile financial times.

So I applaud Congressman Jefferson for this visionary practice, no doubt born of difficult times in his life. One of nine children, Jefferson knows hardship. It is likely he set his goal early in life to make a difference. And William Jefferson would grow up to become Louisiana’s first Black congressman since Reconstruction.

During Reconstruction, you know that period right after the Republican’s freed the slaves, there were over 2000 Black men who served in an elective office. This number fell off dramatically once Reconstruction ended and the racist Democrats began their programs aimed at demoralizing Blacks and preventing Blacks from voting either by law or intimidation.

So for Congressman Jefferson to achieve something so monumental, I mean a Black man getting elected in this day and time, well “times, they are a changin’“. And then to get our new Messiah, well indeed the world has turned on its axis.

Lucky for you liberals, Jefferson didn’t squander his opportunity to make America, and most of all Black people proud. I don’t know about you, “but right now…for the first time in my adult life, I am proud to be an American…“ 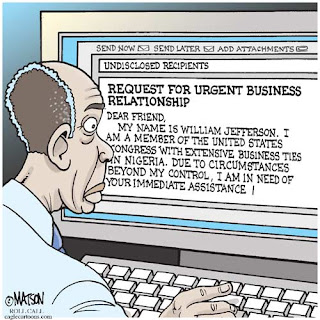 “Officials say the money was part of a payment in marked bills from an FBI informant in a transaction captured on videotape. Jefferson also is accused of soliciting and receiving hundreds of thousands of dollars in bribes for himself and his family in exchange for promoting their products and services to countries in Africa.”

So Jefferson’s hypocrisy was not limited to shaming Blacks in America, but extended to selling African’s whatever the highest briber would pay. Pleather, Nehru, polyester was all for sale, hell send those Africans back into the 70s!

But there were two little extras that validated what America is all about, that came from this disgrace: (1) a Republican now holds this seat in Congress, and (2) Anh “Joseph” Cao is America’s first Vietnamese congressman. I bet Mr. Cao does a lot more to make American proud than Jefferson ever did.

Don’t be surprised if you see Jefferson acting as an “advisor” to His Highness’ transition staff, or at the very least getting his pardon, once he is rightfully thrown in jail. After all, Obama loves those radicals!

Kevin Jackson is an author of four books in sales and politics, as well being the author of The Black Sphere blog. He has been published in Africa News and Hoovers. Visit Kevin at http://theblacksphere.blogspot.com or email him at [email protected]
The Black Sphere online magazine is at www.openzine.com/theblacksphere, and you can catch Kevin on The Black Sphere radio show every Thurs 9P-11P Central (times subject to change) http://blogtalkradio.com/TheBlackSphere
Facebook Twitter
Kevin JacksonDecember 15, 2008
3 minutes read