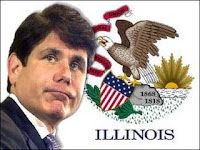 So would you want to be Roland Burris (pictured right) today in light of Blagojevich naming him to Obama’s vacant senate seat? He must feel like the Michelle Obama, who got into Princeton based solely on affirmative action.

Can’t you just hear the whispers as Burris walks the halls of the Capital Building? “That’s the guy who ‘paid’ to get his seat. He didn’t actually ‘earn’ it.” Or, “…he’s different than us.” Well not really.

And the cojones of liberals. Blagojevich was arrested, got out of jail on his own recognizance. He went back to work, and it’s been “business as usual” since. And for Chicago politics, it was indeed “business as usual”, and just another day in the governor’s office.

Here are the charges:

Conspiracy to commit fraud, which carries a maximum penalty of 20 years in prison, and solicitation to commit bribery, punishable by up 10 years.

And there is a mountain of evidence in his own words. This much evidence is more than enough to make any Conservative kick his own butt, drive himself to jail, and check himself in.

But not a Democrat. Despite overwhelming evidence against him, Blagojevich chose “the Clintonian approach” which is to just denies.

You got audio. “Oh those recordings, I was just playing around.”

You have video tape. “That could be anybody with a raccoon-humping haircut, and that doesn’t even look like me.”

You got witnesses. “So what? Eye-witnesses are unreliable.”

Democrats are the finger wagging, look dead in the camera, squinty-eyed and all, and they will fight unitl the bitter end. These guys whose wives walk in on them in the act of having sex with their assistants (note “unisex” reference), and the Democrat will casually get butt-naked out of bed. Get dressed, as his wife is screaming, and the assistant grabs his/her purse and exits the home. The Democrat grabs the paper and begins watching television…like nothing happened. Libs are slicker than snail trails, and that’s scientific fact!

Yes wifey, your eyes have just lied to you, deceived you. And liberal public, just because I was on video talking about a payoff to an FBI agent in an FBI sting, and they found $90K in my freezer, that don’t make me guilty (see Liberal Scoundrel). This approach is called “The Jeffersonian“.

Catch me smoking crack in an FBI sting, and it was a set up. The FBI made me go buy crack. Get arrested and convicted. Opt for rehab, because liberals and celebrities get that choice. Then…you got out of rehab, run for office again, and the people of DC will re-elect your crack-smoking behind. This is what is known as “The Barryesque” approach.

So don’t be surprised if Blagojevich’s appointment of Burris goes through, or if he actually beats the wrap. All that will be left will be to get re-elected, and then serve on Obama’s cabinet, when one of Obama’s current appointees “pursues other opportunities“.

Such is the Democrat way, and for liberals, this is just politics as usual. So Burris, I welcome you to the taint of affirmative action, political style.

Kevin Jackson is an author of four books in sales and politics, as well being the author of The Black Sphere blog. He has been published in Africa News and Hoovers. Visit Kevin at http://theblacksphere.blogspot.com or email him at [email protected]
The Black Sphere online magazine is at www.openzine.com/theblacksphere, and you can catch Kevin on The Black Sphere radio show every Thurs 9P-11P Central (times subject to change) http://blogtalkradio.com/TheBlackSphere
Facebook Twitter
Kevin JacksonDecember 30, 2008
2 minutes read
Don’t Miss Out!