The mainstream media will never tell you this, and I was shocked to hear Fox News today make a short reference to what you are about to read.

So I am asked often by Liberals, “What good has George Bush accomplished? I began this series with the blog Terrorism…Post Election, regarding the fact that since 9/11 there have been no terrorist attacks on American soil. The second part of a multi-part series, i.e. this blog will tell you yet another thing that Bush has done right, with focus on Bush’s policies for Africa.

You see, many people are quick to say that the US shouldn’t be fighting wars in Afghanistan or Iraq. They are obvious mediabots, spewing nothing but ‘talking points’. Because when pressed, all they say is we are spending $10B a month in Iraq, blah blah blah, droning on like Stepford Wives. Forget the fact that the war received bi-partisan support, and was not just George W Bush’s Excellent Adventure. I chalk this up to a combination of Liberal ignorance, combined with heavy media hypnosis. But what interests me more is the Black perspective on this. 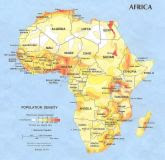 Blacks are much more interested in domestic affairs for the most part, as opposed to Jews for example who base many of their decisions on how Israel will be treated. But today Blacks act as if they have suddenly become experts in world affairs, yet there is little to no discussion of Africa…the Motherland? Perhaps like Obama, Blacks have thrown Africa under the bus?

Because if Blacks and other Liberals did look at Bush’s policies in Africa, one major policy initiative being PEPFAR, “The President’s Emergency Plan For Aids Relief“, they could come to but one conclusion. Bush has done more for Africa, than any other US president in history.

Conversely, Clinton, the real first Black president had one of the worst policies in Africa. He actually made Jesse Jackson ambassador to Africa, which was a dismal failure. Recall this assignment was given to Jackson during “The Blue Dress” incident, so Slick was a bit distracted. The 300,000 African deaths for which the Clinton/Jackson team was responsible rates pretty low, when you are dealing the larger issue of “getting rid of a protein-stained dress?” Needless to say, Blacks love of Clinton and disdain for Bush definitely qualifies for a submission to Bizarro World.

The media is quick to showcase Darfur, Zimbabwe, the Sudan, or Somalia, when mentioning the Bush administration. In other words, pick your African country failure, then blame Bush, as if he himself is there creating civil wars or captaining Somali hijackers’ vessels. But like most Liberals, even when it’s proven that a Conservative has done the right thing, they can’t give credit without an ‘escape clause’.

Said Melvin Foote, president and CEO of Constituency for Africa, a coalition of groups that work to improve conditions on the continent:

“The Bush administration has broadened and deepened U.S. policy towards Africa…I don’t know if it got involved for all the right reasons, but once it got involved it realized this was a good thing to do.”

What Foote is referring to is the Bush administration’s efforts to stabilize Africa’s fledgling democracies and combat its daunting health problems, specifically HIV/AIDS and malaria. Since 2003, the Bush administration has provided funding to increase the number of Africans receiving anti-retroviral drugs from 50,000 to 1.4 million, according to Jendayi Frazer, the assistant secretary of the Bureau of African Affairs. The actual number now exceeds 2M.

And for you pro-life Conservatives that felt as though Bush has done nothing for the cause, here’s a morsel for you:

“It’s probably true that the Bush administration has directed more resources to the African AIDS problem than did the Clinton administration,” said Nicole Lee in a grudging offer of support. But Bush’s African AIDS program has been “a double-edge sword,” said Lee, executive director of TransAfrica Forum, a Washington-based advocacy organization for Caribbean and African policy. It has been undermined, she said, by the “Gag Rule,” a Bush administration policy that forbids foreign non-governmental organizations from receiving U.S financial support if they offer abortion or abortion counseling.”

What Ms. Lee is saying is that Bush tied strings to this money. The strings were that the US would not fund the programs, if the funding was used to promote abortion throughout the world. Yes, Conservatives, abortion is not just a US issue. You should note that one of Obama’s first acts as president will be to rescind this order.

The other thing you should note about Ms. Lee’s comment is how she casually mentions that Bush spent more money than Clinton in Africa. It was not that Bush just outspent Clinton, but that Bush’s policies were effective in Africa, and not just a needed distraction…like bombing an African aspirin factory.

So how has The Bush Doctrine that has been so disparaged by the mainstream media benefitted Africa? Let’s look at the statistics.

In 1989, there were only three countries in sub-Saharan Africa that were considered democracies by the international measures of democracy: Botswana, Mauritius, and Senegal. Today there are over twenty. These are measured by Freedom House and several other independent groups.

Ask any Liberal knowledgeable about this topic [if you can even find one], and they will quietly admit that Bush’s Africa policies are an overwhelming success. Why doesn’t the media report this?

The media can’t have African-Americans rallying behind Bush or the Republican party in any way. So just like the Liberals have swept the racist policies of Democrats under the rug, and they are doing the same with the phenomenal work done by the Bush administration in Africa.  Keep those “slaves” stupid and hungry.

Most of the world has done nothing but take from Africa, a continent teeming in natural resources. However unlike most of the world, the US, specifically George Bush has shown his compassion for helping Africa, taking nothing. The Liberal hypocrites in America with all their causes, just aren’t that interested in telling the truth about the Bush policies in Africa. There’s just not enough money in it.

Kevin Jackson is an author of four books in sales and politics, as well being the author of The Black Sphere blog. He has been published in Africa News and Hoovers. Visit Kevin at http://theblacksphere.blogspot.com or email him at [email protected]
The Black Sphere online magazine is at www.openzine.com/theblacksphere, and you can catch Kevin on The Black Sphere radio show every Thurs 9P-11P Central (times subject to change) http://blogtalkradio.com/TheBlackSphere
Facebook Twitter
Kevin JacksonDecember 3, 2008
4 minutes read
Don’t Miss Out!