The zoo enhanced one of its exhibits. Yes, Obama and Biden pumped up the stakes, adjusting the jobs creation plan from 2.5M jobs to 3M jobs. So another 500,000 people now have job security, because The Messiah simply says so. I breathed a sigh of relief when I read this.

Now Mr. Obama hasn’t exactly explained the details in his first jobs plan to create or save 2.5M jobs, but who are we to question The Messiah. If he says he will feed now 500,000 more people with 50 fish, then yea verily it shall be so.

Now you might be asking, “What has changed that added the additional 500,000 to the goal?” Did the US hit the Nigerian lotto? Did we find Al Capone’s real vault? Short answer: Nothing has changed. However, when you are full of empty promises, you can promise whatever you like. Next week Obama will likely increase the jobs goal to five million, no, make it ten!

Recall in my blog Obama the Creator of 2.5M Jobs that I defined ‘save’ in Obamaspeak. The clue here is that if you get to keep your job, then Obama saved it. It really is that simple. When it is all said and done, Obama will likely take credit for “saving” ten million jobs, and the media, liberal pundits, and so on will be anointing his feet with oil. 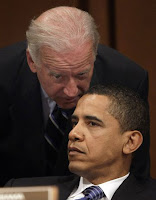 I find Obama to be like my idiot cousin who continually “borrows” money from me, of course never repaying it, but always promising. And when we discuss things like loans, he comments, “Dude, you know if I was rich, I would hook you up!” Well that “if” is nothing for me to concern myself with.

When I blogged earlier on Obama…2.5M Jobs, I alluded to the idea that Obama believes his “job creation” will come in the form of infrastructure jobs, repairs to Federal buildings, including schools, and “green” initiatives. He believes he is FDR, and the sad news is…he is! In fact he is likely more socialist than FDR.  Read Obama the Regulator – The Raw Deal.

FDR got lucky, in that he had with his “Whiskey shot” known as the New Deal, a “beer chaser” known as WWII.

Here are a few elements of the Obama-Biden plan from this article in Yahoo News:

Obama’s team and congressional staff over the last week have been scrambling to come up with details of a plan to pump up the droopy economy with $650 billion or more in government spending over the next few years.”

I’m not sure how many jobs “disease prevention” creates or saves, but he is The Messiah. And as for weatherizing one million homes, well why not ten million? If weatherizing one million creates X, then ten million should create 10X, if my math is right. And what happened to “inflating our tires”? Surely that idea is not under the bus? How many jobs would that create? I will search “tire inflators” on Monster.com, and get back with you on that one.

Next he plans to dump (their word, not mine) $650B into the economy. I agree, it will be dumped. They could consider just burning it as well, as I predict the same outcome in its impact in the economy. A bunch of people who don’t deserve the money getting the money. Well I can see the stimulus this will create.

Here is the translation of “dumping” $650B into the economy – Pay the bribes to the poor who got him elected. A little Steak Tartar for the ObamaZombies.

The “plan” here is simply to “divvie” up the $650B into nice little slivers, and send them out in the form of welfare, oops…stimulus checks. For you recipients, be sure to have your pan class=”Apple-style-span” style=”color:rgb(51,51,255);”>Obama-Biden signs up, so the postman knows where to deliver your welfare checks.

So Obama shores up the blue states’ votes, by rewarding them for their fiscal irresponsibility. Such is the way of liberal lunacy. And you can bet that there will be no accountability in this plan for the states, because why hold states accountable, when you will need their votes in future elections?

And Obama will not face this battle alone, as Biden has been uncaged.

“Biden, speaking in an interview set to air Sunday, said he believed there will be another stimulus package of roughly $700 billion to keep the economy from “absolutely tanking.””

I hope you have enjoyed your trip to the zoo today!  We will visit again soon, you can bet.