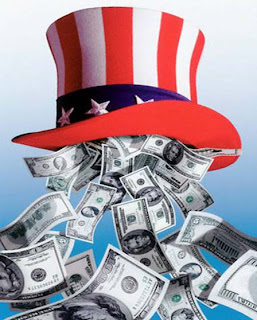 I find it interesting that the Democrats are already out doing pre-emptive damage control over the stimulus plan. They are saying that this massive stimulus plan will offer “no quick fix for the economy.” So apparently there is nothing “stimulating” about it. All the plan has to offer is “size”. And in the end America is left unsatisfied and…sore.

Biden said recently, “We’re off and running, but it’s going to get worse before it gets better…”

The idea that we can spend a trillion dollars and have nothing immediate to show for it, well that’s incomprehensible… unless you’re a Democrat. They are very use to spending money and getting nothing in return, like the recent $350B that nobody seems to be able to track. Notice how that bit of information has slipped to “page 16”. But those ornery devils keep asking for more money.

But we are told by them, that The Era of Transparency is upon us. Here is my definition of ObamaNation’s transparency: Transport us blindfolded, then throw us in the dark room for a “look-see”.

Folks we are witnessing a master magician performing sleight of hand. They say that there will be no more pork. Yes, the Messiah is in charge, so the system has been cleansed. Right, the bowel system.

And in fact, lobbyists are so bold as to state openly that there will be “workarounds” to the new system. And just like the changes in the tax law every year, the lobbyist are hard at work figuring out how to milk the maximum amount of our tax dollars from our pockets and into their clients’ projects. Their clients? Our Congressmen by way of their campaign contributors.

But you have to give this administration credit in their chess strategy. Go big and hype it. And just before approval, start letting the air out of the balloon. I think Obama may have said it best on Ignoration Day, when he said that we need to “lower expectations”. I know. I already did…on Nov 4 and again on Jan 20. My expectations just can’t go any lower, though my outrage finds new depths daily.

So Geithner, the new Treasury Secretary now wants to “move fast” to get his nanny and tax issues behind, and prove to America that he is the right choice for the role. This should scare you. When did you ever make a fast decision that worked? Snake oil salesmen thrive on you making fast decisions. “Today only sale“. “If you leave, I can’t offer you this again…”. “I’ll just need your credit card number…” And so on.

I would think something like the American economy would require quite the opposite, like careful deliberation, and a review of what works, and what doesn’t. But no, we are in a “crisis“.

What is interesting about Geithner’s rush to action is that he wants to get his hands on Obama’s large package, and Biden is telling us that the stimulus won’t kick in for quite some time. I will leave you to ponder the humor of that statement.

And Larry Summers, a top economic advisor to Obama offers nothing more than empty rhetoric, as showcased here: 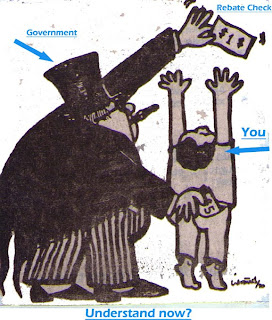 “So even as we move to be as rapid as we can in jolting the economy and giving it the push forward it needs, we also have to be mindful of having the right kind of plan that will carry us forward over time.”

That my friends, is double-talk, aka ObamaSpeak.

Crisis management is the Democrat’s way of “jolting” America into allowing them to pick our pockets. We have been led to believe that they must have this package in place or America will fail. And the Democrats believe so much in their plan, they are actually selling it on the concept that it won’t actually do what they say it should do.

As usual, Democrats get what they want, and America doesn’t even get a lousy dinner out of it.