With Caroline Kennedy, the Democrats managed to find somebody less qualified than Hillary, but with name recognition. Great fit to fill a NY senate seat, and with a suitor who had the financing in place to buy it, if necessary. So Caroline looked like a shoe-in. But her ultimate demise reminded me of a multi-team NBA trade, as she was dealt because she had nanny issues, for the potential of a tax issue, plus “…an issue to be named later at a later date.”

So the Democrats’ hands were forced to actually look for a qualified candidate, given all the brouhaha. A real conundrum. It’s difficult to find anybody willing to buy into the lunacy of Democratic ideas…the “Idiocracy”, right?

Yes, even Democrats don’t believe the hype of the far left of their party, so finding a qualified Democrat willing to take up the mantle posed a series of problems. Why is there a potential stink over her appointment? Well the appointment of US Representative Kirsten Gillibrand offers up the aroma of…Conservativism.

First she is not your typical Democrat, and in fact may be a sheep in wolf’s clothing for the “Dims”. Yes, I believe Gillibrand is that animal of fiction, a closet Conservative.

These rare animals do exist, as I have documented, unofficially of course. And their scientific name is “Conservativeagendasaurus“. I’m no archaeologist, but a DNA check will reveal this fact, as it did in the unearthing of the first Black Republican of the modern age, “Closetus Republicus“, also known as Renaissance Man.

I am friends with one here in St. Louis, and I have become able to recognize them hiding under the Democrat umbrella in order to get elected in Democratic enclaves such as New York.

Here are examples of why I believe Gillibrand is a Conservativeagendasaurus.

First she is pro-gun. But to simply say that she is pro-gun is to say that Tiger Woods plays golf, or that Michael Jordan played basketball, or that The Black Sphere is just a blog…ok the last one was just to see if you were paying attention.

Rep Gillibrand received a 100% rating on support for the NRA. Ladies and gentlemen, I give you the poster child for the NRA, and an overachiever at that. Charlton Heston only got a 98%, and he ran the joint for years! What’s that? Yes, I heard it as well. It sounded like the echoes of a Sarah Palin rifle shot…moose down!

Next, Gillibrand is a fiscal conservative. I know, I should have asked you to sit down on that one. She actually voted against the $700B bailout, going against the party line, bucking the system, swimming upstream. A maverick! There are no maverick Democrats. That animal does not exist. 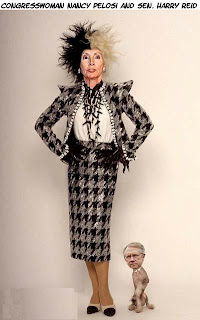 When the Time Magazine says the Most Admired Woman in America is Hillary Clinton, I say to women you have a serious void in qualified candidates, and are in serious need of new and legitimate role models. Hillary has done nothing tangible to promote the cause of women, unless you consider riding on the coattails of a man makes her worthy of such an honor. Nice work if you can get it.

Look at what the Democrats have to offer as so-called female role models: Maxine Waters, Sheila Jackson Lee, and Cruella deVille herself, Nancy Pelosi. It’s easy to see that the ‘Dims’ needed this shot in the arm. But what else did they get?

Gillibrand brings to the Democratic women of Congress what Elizabeth Hasselbeck brings to the cast of The View. Quality. And I say to my fellow Conservatives, there is a reason they didn’t pick Gillibrand to begin with. She has her own “…issue to be named later“. She’s a Conservativeagendasaurus.

Kevin Jackson is an author of four books in sales and politics, as well being the author of The Black Sphere blog. He has been published in Africa News and Hoovers. Visit Kevin at http://theblacksphere.blogspot.com or email him at [email protected]
The Black Sphere online magazine is at www.openzine.com/theblacksphere, and you can catch Kevin on The Black Sphere radio show every Thurs 9P-11P Central (times subject to change) http://blogtalkradio.com/TheBlackSphere
Facebook Twitter
Kevin JacksonJanuary 23, 2009
3 minutes read