The financial package is really not even news anymore. The fact is that America is about to eat a “crap” sandwich, with a side of “crap”. Dessert? How about a slice of “crap” pie? You want a something to drink? Here’s some kool-aid.

The so-called stimulus plan is pure unadulterated crap, as I and about ever other Conservative writer in the blogosphere has reported. So I will limit my disgust to a single item.  Education.

One-sixth of the budget is allocated for schools. An area where there is so much waste and abuse, that to put more money into schools is tantamount to burning it.

Figuring overhead, e.g. building rental, text books, desks, etc., I’m comfortable saying that if I ran a business like this, I could net $150-250K. And after year one, when I would no longer have to purchase desks, computers, books, again, I could increase my profits. And my kids would be standouts, and not the Liberal little knuckleheads that voted for Obama. Why is “capitalism” not happening in our K-12 schools, when the money is clearly there? Ebonically speaking, “Gubment?”

The bigger deal however is that there is one truism in government that is indisputable and indefensible. Government will never cut a budget. Once money is allocated, you won’t get it back.

Americans have long forgotten that the income tax was established to finance the war effort, that war being the Democrat warmongering effort of WWII, which by the way this Conservative is in full historical support of. The income tax was to be rescinded after the war, and was never to exceed 5%. So much for government promises. They won’t even simplify the tax system, so you know it will never be rescinded, as promised.

Heard of these “temporary taxes” on gasoline ever being rolled back to the taxpayer, or eliminated altogether? No, and you won’t. So whatever new “entitlements” that are added in this time of crisis, will be what we entitle to our kids.

Conservatives, I am warning you, and I will continue to warn you: Don’t only consider what Liberals are doing today, but think beyond what you see or hear. Their agenda has an eye on the future, and they deal in crisis management in order to perform their sleight of hand.

So where’s the pork going? $20B of this money is allocated to “fix up classrooms”. As if that has anything to do with ‘learning’. This is Obama’s great idea to “create jobs”, and to put money into education. Just can’t use White construction workers!

$39B to stave off school cuts. Translation on this porkchop: Save the teacher’s union. It doesn’t matter that many of these teachers are ineffective. They are union, and the union must be saved “at any cost”, sort of like the UAW.

And If you think Americans make bad cars with overpriced workers, consider the commodity being produced in our “gubment” schools. I give you…”The Teachers’ Union”. [Note: I have had some excellent teachers, and am not condemning ALL teachers…just the Liberal ones!] 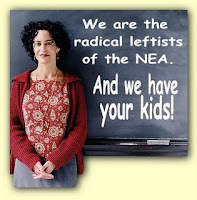 You don’t see a lot in here for the kids now do you?  The money being proposed for education is a farce…crap, as stated earlier. As for the amount of crap, think elephant dung heap and you will have a basic idea. Actually think herd of elephant crap, and you are closer to the reality of it. This idea is insane. But as I like to say, Liberals don’t suffer from insanity, they rather enjoy it.

When it comes time to rescind these unbelievably bad policies, do you think a Democrat will step up? Of course not, as they don’t possess the male genitalia it takes to put the country first, and they don’t really care about school kids.  They care about votes.

So some poor Conservative will bring this to the nation’s attention, only to be demonized as being “against education” or “not caring about kids”. And the taxpayers of America are paying for this gamesmanship by Liberals. Errors will have been made, others will need to be blamed.

Such is the Liberal way. Allow a Conservative to take the high road of responsibility and accountability, so Liberals can publicly castrate him. No wonder Liberals are so sympathetic to terrorists. They share the same tactics.

Kevin Jackson is an author of four books in sales and politics, as well being the author of The Black Sphere blog. He has been published in Africa News and Hoovers. Visit Kevin at http://theblacksphere.blogspot.com or email him at [email protected]
The Black Sphere online magazine is at www.openzine.com/theblacksphere, and you can catch Kevin on The Black Sphere radio show every Thurs 9P-11P Central (times subject to change) http://blogtalkradio.com/TheBlackSphere
Facebook Twitter
Kevin JacksonJanuary 29, 2009
3 minutes read