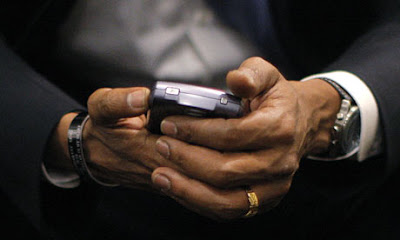 What is Obama’s fascination with the Blackberry? The device is a huge physical security risk because it is essentially a GPS unit that allows anybody to know where he is at any given moment, when it is active. It is a further security risk in that all the messages sent and received can potentially be read. Yet even with this knowledge Obama treats his Blackberry like Linus’ blanket.

It has been said that Obama paraphrased the late great Republican and President of the NRA, Charlton Heston in reference to his Blackberry, saying something to the effect that, “…would have to pry it from his hands“. Well that’s one way to get it.

So Obama’s staunch conviction about keeping his Blackberry indeed piqued my curiosity about his motivations.  Let’s examine the possibilities:

One conclusion I came to is that Obama needs the Blackberry, so the people actually running the country have instant access to provide him with “talking points” and policy decisions. Such is the fate of a talking head. I can see the IM, that’s “instant message” for you technophobes, from Pelosi and Reid now: “…Just stand there and look presidential, until you receive further instructions“.

Next, with supposedly over 6M contacts, perhaps Obama feels more “in touch” with his constituents when he is wearing the Blackberry. I’m sure the ObamaBots are happy to have instant access to him, though I must say, it concerns me. Particularly when I recall during the campaign Obama said that he would consult with literally hundreds of people in order to set his foreign policy agenda.

So people like P Diddy’s and Ludicrus’ messages could accidentally be interpreted as official communiqué. Here is a very real example of what could be misinterpreted: “Yo ‘P’ [street name for the president]…when can I let my peeps know they gittin’ they stimulus checks…oh, and let’s supersize ’em?”

Legislation from the hip. That’s where Obama carries his Blackberry. Like the six-shooter of a Spaghetti Western gunfighter, Blackberry at his side, Obama is always ready to do battle.  To legislate at the drop of a hat. And make no mistake about it, Obama needs to feel like he is legislating all the time.

Remember that in only 123 actual days at work in the US Senate, Obama sponsored or co-sponsored over 800 pieces of legislation. If you know anything about how legislation gets written and ultimately sponsored, well to sponsor this feat is next to impossible.

That would be like feeding 5000 people with three loaves of bread, like Jesus. Or it might be more like satisfying “nature’s urges” of three million people with only 5000 porta-potties? Only the outcome with all of Obama’s senate legislation was as his initial suggests: “O”.

But consider all the messages that it would take to work on such legislation; the coordination. Message between Pages and Senators, Admins and Senators, Senators to Senators. Then let’s not forget lobbyists, big campaign contributors, 527 PACs, union officials, foreign governments, terrorists, and finally Liberal university professors…oops redundant; I already mentioned ‘terrorists’.

There is only one way to coordinate all that activity…the Blackberry!  But there is one more thing. 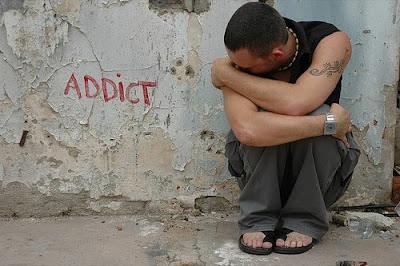 Obama is a Blackberry addict. A Crackberry is the official label I believe. He has an addictive personality, proven by his inability to quit smoking. The Crackberry is just another addiction that he can’t break, but a far more dangerous one for us.

Because Obama must be “active”, constantly doing something…a tweaker.  As long as he is pushing buttons, he satisfies his addiction. Responding to emails, checking opinion polls, IMs from his bosses, looking for flaws in The Constitution, and so on.

Then he starts tweaking, dismantling things, taking them apart, dissecting them in some mind-bending, drug-induced attempt to “make things better.”

But when the drug wears off, all you have left is a TV that doesn’t work and a lot of extra parts lying around.  Sort of like how the US economy will be in a year or so.

Kevin Jackson is an author of four books in sales and politics, as well being the author of The Black Sphere blog. He has been published in Africa News and Hoovers. Visit Kevin at http://theblacksphere.blogspot.com or email him at [email protected]
The Black Sphere online magazine is at www.openzine.com/theblacksphere, and you can catch Kevin on The Black Sphere radio show every Thurs 9P-11P Central (times subject to change) http://blogtalkradio.com/TheBlackSphere
Facebook Twitter
Kevin JacksonJanuary 24, 2009
3 minutes read
Don’t Miss Out!