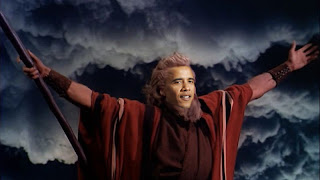 The original title of this article on Yahoo News was Obama Speaks to Bush on $350B Bailout Funds. I found this title humorous, as I envisioned Obama on the same religious pilgrimage as Moses. Recall that God spoke through the burning bush, and asked Moses to free the Jews from the Egyptians.

Apparently Obama had a modern-day burning bush moment, since he feels he needs to free the enslaved $350B bailout funds from the coffers of the evil treasury, and has asked George Bush to help.

Surely no liberal would argue with Obama encountering a “burning Bush”, pardon the pun.

“The Lord said, “I have indeed seen the misery of My people in Egypt. I have heard them crying out because of their slave drivers, and I am concerned about their suffering. So I have come down to rescue them from the hand of the Egyptians and to bring them up out of that land into a good and spacious land, a land flowing with milk and honey…”

So this 21st-century version of Obama’s encounter with the burning bush, Obama is asking that the suffering of his people be eased by having the remainder of the bailout funds “at his disposal“, when he takes office. Because he really did promise to rescue his people from their enslavers, and to bring them to the land of milk and honey, did he not. I guess the idea of America being, “The Land of Opportunity”, well that just takes too much work.

“Give me your tired, your poor, your huddled masses, yearning to…get on welfare?“

How stupid of me to have believed America to be the land of opportunity, before ObamaSpeak became part of my daily lexicon? Let’s just cut to the shortcut, and eliminate the idea of success taking a little elbow grease. Why work for it, when the government is there to just give it to you?

Obama wants $350B “at his disposal“, [his words, and a fitting way in which to refer to it] when he takes office. And here we can’t even track Obama’s campaign donations! Add to this the fact that $350B of our money has already gone AWOL, and it was his team who approved it. Will somebody issue an Amber Alert for that money?

You must appreciate, no marvel at the ease in which guys like Obama deflect from their lack of fiscal responsibility, then in the next breath ask for more money. That takes guts.

It’s like getting caught by your wife on a date with another woman, and before she can get indignant, you ask her if you can date one of her friends. “Honey, you already know Susan, my secretary. Yeah, I was wondering if you could hook me up with your friend, Janet? Can we make that happen?”

Now the conspiracy theorist in me believes I have the answer to where the new $350B will go.

Recall that I recently blogged about the President-select’s package, and the fact that it was reduced from $1.2T to around $755M, in a rarely performed de-emphasizing surgical procedure, known as a “MoreSellableBudgetectomy”. Well that $350B would just about make up for that MoreSellableBudgetectomy, now wouldn’t it? And Madoff is the only guy going to jail…Incredulous!

I find the bailouts similar in nature to the state lotteries. States enact this form of legalized gambling under the guise of helping fund education, repair roads and bridges, and to reduce the tax burden on the public. But only a small percentage reaches the schools, and other things for which they were earmarked. The rest just sort of disappears as “rounding errors” in the budgets.

As soon as Obama takes office, Congress will likely have greased the skids on Obama’s almost $800B spending package. The package to this day has no specifics, just vagaries of a lot of jobs to be created by the Fed.

I don’t know about you, but I’ve had about enough of the “trust me, I’m a doctor” approach with this group, haven’t you? Anybody know the location of that talking bush. Maybe it can point us to that $350B we can’t seem to find.

Kevin Jackson is an author of four books in sales and politics, as well being the author of The Black Sphere blog. He has been published in Africa News and Hoovers. Visit Kevin at http://theblacksphere.blogspot.com or email him at [email protected]
The Black Sphere online magazine is at www.openzine.com/theblacksphere, and you can catch Kevin on The Black Sphere radio show every Thurs 9P-11P Central (times subject to change) http://blogtalkradio.com/TheBlackSphere
Facebook Twitter
Kevin JacksonJanuary 15, 2009
3 minutes read