DISCLAIMER – Based on a comment, I want to be clear that this article is not about “fat people”.  Most of my family is fat and I adore them.  This post is more about the idea that Oprah caused people to become consumed with weight and not being happy, and I declare for this and other reasons she is a fraud…who happens to be fat…again!  So don’t bash me as a “Fatish”…play on Facist for the challenged:  READ ON The Black Sphere 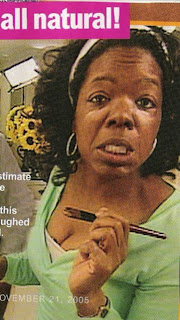 Breaking news: Oprah is fat…again. She was on CNN today discussing her “battle with the bulge”, saying that she did all she could do recently to “cover up” her fatness. Hey Oprah, “The cover-up didn’t work. Everybody knew!”

She said that the realization occurred to her when she had to get on stage with Tina Turner and Cher…ooo, that Cher is a little one. Oprah said that she dreaded it.

Further, she said that getting ready for her photo shoots for her magazine “O” were embarrassing, as her staff tried to “cover up” her weight gain. This brings up another point, which is Oprah is more of a product of affirmative action than I originally thought.

How would “O” be produced, back in the 60s? Without Adobe Photoshop Oprah couldn’t produce a single edition of “O”. And I am not just talking about her “battle with the bulge”.

She is a product of better bras, makeup, fake hair, fake nails, designer clothes, and a host of other techniques that marketers use to dupe the public, and yes, we men as well. Fact is, that the ego-centric “production” that is “O” could not happen without the magic of today’s technology. “O” would be more aptly titled “O My God, I’m Fat, Unattractive, and a Liberal Fraud“, maybe “Uh O!”, when you consider the artist cleverness it takes to produce that rag from cover to finish. 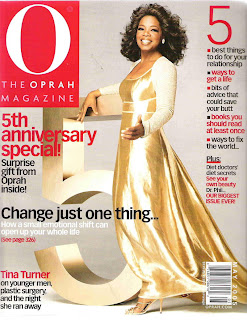 So let’s credit the Picasso’s it takes to transform the “real” Oprah into what the public sees. Stated differently and perhaps more plainly: Oprah is “fugly“. If you think Monet was the “master of light” and a great Renaissance artist, then you should consider the large crew of people it takes to beautify Oprah in that same context. These people are miracle workers in my very fact-based opinion. Talk about not having a blank canvas.

But if one were to visit this planet from another planet and see Oprah on her magazine cover, one might actually be duped into thinking that Oprah is an attractive woman. Imagine all the duplicitous information contained therein, when you consider the false advertisement on the cover?!

How does Ms. Winfrey afford all these artists, nutritionists, and others in her entourage? Because of her “battle with the bulge”!

Yes, Oprah has pimped weight loss better than Subway pitch man Jerrod, Richard Simmons, Susan Powter, and all the other “I once was fat, but…” crowd combined. Nobody has made more money off the subject of weight, than “Ofra“.

Woman relate to the “fat girl gone thin“, the way many men relate to “Girls Gone Wild“. And Oprah sold herself like snake oil, because Oprah has never been “thin”. Yes, I said it!

I know, she got down to size 6…once, dragging 60lbs of fat onto the stage on her show. But Oprah was still “fat in the head“. She has never envisioned herself otherwise, which is why she works so hard to be relevant. She isn’t happy with herself despite the fortune, the fame, and…the fantasies.

I wrote last on Oprah about her need to “feel good”, and to create fantasies. It doesn’t matter that they don’t necessarily end up with the real Hollywood ending. She has a short-sighted view, regardless of whether it stands the test of time. Need examples?

Oprah is a fraud. And instead of suing McDonald’s because the Big Mac meals are making you fat, I say sue Oprah. She made you believe it was possible. She has personal trainers, nutritionists, and other support staff around to steal donuts out of her pockets. And today we learned that after all the dieting, Oprah real problem has been (tragic music here)…a thyroid condition. She now proclaims, “I’m just fat, y’all , and it’s because of depression and my thyroid.”

Yes, the untrustworthy and dreaded thyroid. That gland must be saying, “Will y’all please stop using me as your excuse“.

So what about the millions of American women and effeminate men who are fat because of Oprah? How about we chronicle America’s fat index with the onset of the Oprah revolution, versus how fat America has become hence. I predict there is a direct correlation, worthy of a class-action lawsuit. Is there an attorney in the house?

And what about those nameless American who died from yo-yoing with Oprah every time she dieted, ballooned, then dieted again, and with different diets. How many people who will forever be nameless, faceless did she actually kill? Well one person I can recall is Luther Vandross.

Luther was a fat, happy, healthy R&B crooner, before going on Oprah. When he joined Oprah in her diet crusade, BAM…Luther lost weight, and shortly thereafter, we lost Luther. He can certainly be counted as a casualty of The Big O. 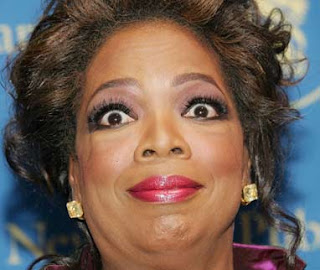 I think at the onset perhaps Oprah did some good for women in America, particularly Black women. She made them feel empowered. But somewhere along the way, Oprah got off track, and I mean completely derailed.

Oprah built her empire on the hopes and dreams of others, promoting herself as the idol of American women, their conscience, their viewpoint, their physical embodiment. And in my opinion, she is one of America’s biggest frauds… double entendre intended.

Kevin Jackson is an author of four books in sales and politics, as well being the author of The Black Sphere blog. He has been published in Africa News and Hoovers. Visit Kevin at http://theblacksphere.blogspot.com or email him at [email protected]
The Black Sphere online magazine is at www.openzine.com/theblacksphere, and you can catch Kevin on The Black Sphere radio show every Thurs 9P-11P Central (times subject to change) http://blogtalkradio.com/TheBlackSphere
Facebook Twitter
Kevin JacksonJanuary 7, 2009
4 minutes read
Don’t Miss Out!