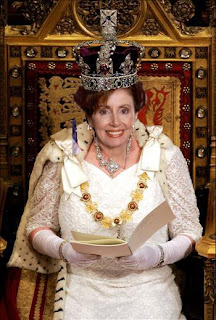 On the plains of the Serengeti, the hyena is one of the most formidable predators, at times even keeping lions at bay. The hyena clan is led by a dominant female with males having no political power. They are tolerated only to fulfill the needs of the dominant female, and are relegated below even the lowest of the other female hyenas. Welcome to the world of Obama and Reid.

And Pelosi wasted no time in exercising her power when she set the parameters for contacts of “her people” with Rahm Emanuel as this article on Yahoo explains, citing Politico.com:

“The speaker has told Rep. Emanuel — who’s leaving his post as chairman of the House Democratic Caucus to become White House chief of staff — that she wants to be informed when representatives of the new administration have any contacts with her rank-and-file Democrats, and why, sources told Politico.”

My staff asked Rahm Emanuel’s staff for a comment, however we were informed, “…the surgery to reattach Mr. Emanuel’s [naughty bits] is still ongoing, and he cannot be reached for comment at this time.” Ouch!

And the fate of Obama is shown here in this roadmap of his first 38 days as “president-select“, as another Politico.com article highlights:

“As Obama makes plans to roll out a sweeping economic plan, Majority Leader Harry Reid gave interviews with Politico and The Hill newspaper and made clear he won’t take marching orders from Obama. “I don’t work for Obama”, he told us.

Even before Obama’s plan was formally unveiled, House Speaker Nancy Pelosi made plain her displeasure with parts of Obama’s emerging fiscal plan, which she believes does not move fast enough to raise taxes. “I couldn’t be more clear,” she said Thursday at her weekly news conference. “Put me down as one in favor of repeal [of the Bush tax cuts] as soon as possible.” “

Finally, once the package was unveiled, Obama’s adviser got a frosty response to some provisions from Senate Democrats, who were kind enough to go public with their concerns. “I just don’t think it works. I don’t think that’s going to give much lift to the economy, as well-intended as it is,” Senate Budget Committee Chairman Kent Conrad, a North Dakota Democrat, told Politico’s David Rogers.

I chuckle as I consider Reid the Chihuahua who has a German Shepard protector, and it is the Chihuahua that thinks he’s the bad ass. “Harry, you work for Pelosi…and so does Obama. “ 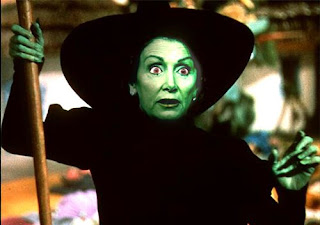 As far left as Obama was in the Senate, Pelosi is so in the House. She rules with a botox-ified stoic glare to match her iron fists. And she will not allow Obama to move center-left, as she suggested in her demand for the repeal of the Bush tax cuts. “Economy be-damned, we still have a White Republican soon-to-be ex-president to blame it on…reward the plebes!”

I believe that Pelosi has gotten exactly what she wants out of this election, and may be the smartest liberal of the bunch. She has a cowardly lion for a president, and a scarecrow for a Senate Majority leader. Guess who she is?

Typically hyena clans can only harass a pride of lions for a while, and occasionally manage to kill weaker lions. But nature has a way of putting things back in their natural order as eventually a male leader of a lion pride will eventually hunt down and kill the hyena leader, sending the hyena clan in disarray for some time. However in this metaphorical example, I think Pelosi is safe for at least four years.

Kevin Jackson is an author of four books in sales and politics, as well being the author of The Black Sphere blog. He has been published in Africa News and Hoovers. Visit Kevin at http://theblacksphere.blogspot.com or email him at [email protected]
The Black Sphere online magazine is at www.openzine.com/theblacksphere, and you can catch Kevin on The Black Sphere radio show every Thurs 9P-11P Central (times subject to change) http://blogtalkradio.com/TheBlackSphere
Facebook Twitter
Kevin JacksonJanuary 9, 2009
3 minutes read