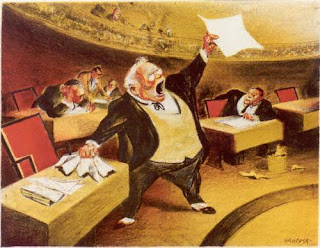 When I wrote about Blagojevich pulling the race card and that Reid is a racist in my blog House Negros, But Not Senate Negros, I was half joking. But as this article in the Chicago Sun Times suggests, I was prophetic.

Apparently Reid did not want Blagojevich to appoint any of the potential Black candidates, and specifically Jackson Jr (Candidate #5). Perhaps Reid was concerned about House values dropping in the Senate? There goes the neighborhood.

“The Reid-Menendez calls came a day before a Dec. 4 conversation overheard on government wiretaps where Blagojevich says he “was getting ‘a lot of pressure’ not to appoint Candidate 5.” Candidate 5 is Jackson.”

Now let me be upfront and say that I am not condemning all Blacks Democrats in the House, though I do condemn their stupidity for being Democrats, thus ignoring the history and present-day agenda of their party. However I know one Black Democratic congressman who at a fundraiser admitted to me privately to “playing the game“, i.e. running as a Democrat in order to get elected, but being a closeted Republican and Conservative.  I blogged about his type in Colin Powell Outed.

And before you Liberals get indignant with me, do some research and go to this link, where listed are all the current Black congressmen in the House with links to their records. It is in a word…dismal.

Most have not sponsored any significant legislation during their entire time in Congress, and are led around by House leadership, truly defining the term “House Negros”. They are given token committee roles by White leadership just to rally the Black vote at the appropriate time. It is political tokenism, par excellent. So if you want to see circa 1950 treatment of Blacks, then the House is an excellent microcosm…Black power with White supervision.

And for the ones who do make it past the “glass ceiling” and are put in the limelight, I direct you to this video of their thorough investigation into the financial crisis, specifically the CEO of Fannie Mae. You can witness first-hand the racial overtones of all their comments, and the aped utterances of their White leaders. And the most vocal is Congresswoman Maxine Waters.

And if the incompetence shown in this video is not enough, Waters has gone on record in May of 2008 publicly extorting the president of Shell Oil with the nationalization of the petroleum industry, stating the following:

In 2005 Waters was on the Citizens for Responsibility and Ethics in Washington (CREW) list of the thirteen Most Corrupt Members of Congress list, and on the 2006 list for her “exercise of this power to financially benefit her daughter, husband and son.”

In the 1992 LA Riots, Waters defended the looting by Blacks saying this:

“If you call it a riot it sounds like it was just a bunch of crazy people who went out and did bad things for no reason. I maintain it was somewhat understandable, if not acceptable. So I call it a rebellion.”

She also said it was “a spontaneous reaction to a lot of injustice” and “The anger in my district is righteous. I’m just as angry as they are.” She responded to the mass looting of Korean-owned stores by saying: “There were mothers who took this as an opportunity to take some milk, to take some bread, to take some shoes. They are not crooks. Everybody in the street was not a thug or a hood.”

If you were Reid, would you want to have to defend this level of stupidity on a routine basis? No, but he has to. To not defend Waters makes him a racist. And we all know that Democrats can’t be racists, right?

So the Democrats’ racist past comes to light. And they are bi-directional racists, playing racism from two directions, Top-Down and Bottom-Up:

Reid by attempting to “Top Down” a Black person’s membership to the most exclusive non-Black club in the world, and (2) the “Bottom Up” by Blagojevich for using a Black man as a pawn in his chess game to get him a token membership to the same club, of course for his own political expediency. Those crazy frat boys!

So here’s the wrap.

I applaud Blagojevich for playing the game skillfully, and pushing Reid to publicly showcase his and the Democrats’ racist agenda.

Further I actually understand Reid for not wanting what the House has, which is a lot of Black congressmen who bring spotlights and loud entourages wherever they go. It’s like going partying with P Diddy. You know somebody’s gonna get shot.

Kevin Jackson is an author of four books in sales and politics, as well being the author of The Black Sphere blog. He has been published in Africa News and Hoovers. Visit Kevin at http://theblacksphere.blogspot.com or email him at [email protected]
The Black Sphere online magazine is at www.openzine.com/theblacksphere, and you can catch Kevin on The Black Sphere radio show every Thurs 9P-11P Central (times subject to change) http://blogtalkradio.com/TheBlackSphere
Facebook Twitter
Kevin JacksonJanuary 5, 2009
4 minutes read
Don’t Miss Out!