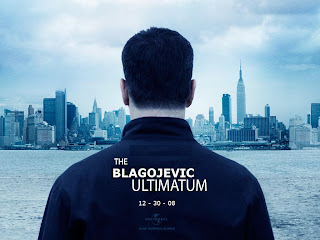 Felons aren’t supposed to vote.  Nor should they appoint senators, right? But the Liberals have ACORN and the atheists, so they are accountable to no one.

And Liberal felons get re-elected or remain in office. I know, I know, “…innocent until“.

Blagojevich’s lack of morals and ethics has provided conundrum for the Liberals.  Here is how a source from this article in the NY Times described the Blagojevich move:

“…the move was simply classic Governor Blagojevich, doing the unexpected and stirring things up, or “just Rod being Rod,” in the words of Representative Jan Schakowsky. “The can of worms he has opened up,” Ms. Schakowsky, a fellow Democrat, went on, “is just the kind he likes.””

Now before you get disgusted with this metaphor, consider that Democrats have been drinking pee-tainted punch for years with their cries of racism at every turn, and now want to complain about the salty taste, i.e. when the race card is used against them.

In “House Negros, But Not Senate Negros“, I blogged that the race card was alive and well.  And apparently Blagojevich bought Jesse Jackson’s heavily used race card at an Illinois pawn shop on the South Side of Chicago.

Race card in hand, Rod is playing chess, while his adversaries play checkers.  And in this latest move I say, “Check“!

“Some said he wanted to cause political trouble for his critics, forcing Senate leaders either to accept his appointee or to be seen as rejecting a respected African-American leader, while others said that he was trying to garner favor among blacks, and perhaps even members of an eventual jury pool.”

Preparing for the potential jury pool is he? This should be an insult to Illinois Blacks, that simply the appointment of a Black senator would be used to gain him favor in a jury trial. Throw in a Navigator, and perhaps we can talk?

Did Rod picked up a “get out of jail free” card at the pawn shop as well? After all, this is Illinois politics.

Either way, good for him. No self-respecting Liberal should go down for only attempting to sell the senate seat. It wasn’t like he did it.  Or did he? Hmmm…

So in order to turn the heat up on the Dems, Blago pulls an en passant, shopping for a solid, proven and very Black man. Race card, “You had me at ‘Hello’“!

Blago (at the store where they sell Black politicians): Sir, do you have a genuine, 100% Black man in stock, preferably with Illinois political connections?

Blago (blushes): As untainted as one could be in Illinois!

Clerk: Let me see. Uh, I know we had a half-Black, no talented ex-junior senator hack a few months ago, and I think we may have another.

Blago: Uh, no, I don’t want half Black, I need full Black, and preferably somebody with substance!

Clerk (goes to warehouse and returns): You’re in luck. I checked inventory, and we have a 100% Black man, who was an ex-Controller, and former attorney general. He’s a three-time loser in Illinois politics, but his tag says that he was likely the best candidate in all three. 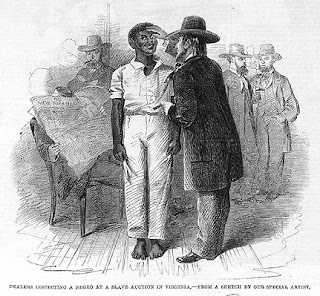 Circa 1860 Democrat move: Public purchasing of a Black man. Affirmative Action would have rolled over in its grave, if it were dead. Actually shopping for a Black man to appoint to one of the most racist institutions in America? Liberals are great for irony, and this move by Blago is a candidate for Bizarro World.

Thankfully Danny Davis, a prominent Illinois Black leader saw through this ruse, and declined Blagojevich’s offer.  However he did recommend that Blagojevich contact Burris.

But do you think Burris minded being used, the proverbial token? Here’s your answer:

“All of those other problems that he [Blagojevich] has, those are his problems,” Mr. Burris said. “He asked me, and I said yes, and I haven’t stepped back since because what the governor has done is legal. If it were illegal, I wouldn’t be bothered with it.”

Quite the corner man for Blagojevich, wouldn’t you say? Remember Burris is the man who ran for senate (against Obama), governor (against Blagojevich), and mayor (against Daley).  This guy never stood a chance.

Chess-great Bobby Fischer has nothing on Blagojevich.  And this latest move may very well go down in history as “The Blagojevich – Rook captures Senate”. Checkmate!

Kevin Jackson is an author of four books in sales and politics, as well being the author of The Black Sphere blog. He has been published in Africa News and Hoovers. Visit Kevin at http://theblacksphere.blogspot.com or email him at [email protected]
The Black Sphere online magazine is at www.openzine.com/theblacksphere, and you can catch Kevin on The Black Sphere radio show every Thurs 9P-11P Central (times subject to change) http://blogtalkradio.com/TheBlackSphere
Facebook Twitter
Kevin JacksonJanuary 2, 2009
3 minutes read
Don’t Miss Out!