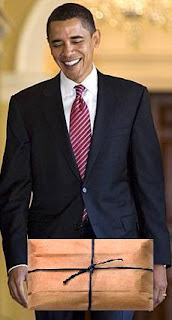 I actually find it humorous that the mainstream media outlets refer to Obama’s new economic welfare plan…I mean spending plan as “The Economic Stimulus Package“. Why not just call it what it is: “The Package“.

Perhaps they are afraid to discuss the President-select’s package in this much more succinct way for fear of short-changing him? They certainly appear very eager to make many of his other attributes appear larger than life.

So hopefully, I will cleverly say what others have not, as I discuss the President-select’s package. And I will focus specifically the size of his package, from both an historical and ethnic perspective.

First, is it any wonder that the largest package ever would come from our first Black president? The myth of “package excess” would certainly precede the President-select, as Blacks tend to save less and spend more per capita than other ethnic group. And at one trillion dollars of proposed spending by Obama, even we Conservatives must admit…that is one impressive package! “It’s twoo, it’s twoo.”

So true in fact that the President-select actually decided to de-emphasized his package the other day, reducing it to just under a trillion. He apparently did not want to overwhelm the public with the unveiling of his package, reminding me of the quip of Cleavon Little, the Black sheriff in Blazing Saddles when he says to the townspeople of Rock Ridge, “Excuse me, while I whip this out!”

As this article in the Washington Post suggests, Democrats are also concerned about the final shape of the package:

“After weeks of allowing President-elect Barack Obama to take the lead in outlining a massive economic stimulus package, congressional Democrats warned yesterday that the final shape of the legislation could look quite different when it returns to his desk for a signature.”

Apparently that figure was not enough, and the package was still an overwhelming topic for members of Congress. The package apparently needs further modification.

So and today the new measurements…pardon me, figures have been released:

“Obama floated five tax proposals this week that he hopes to include in the legislation, representing about 40 percent, or $300 billion, of the overall $775 billion estimated price tag.”

Obama has no idea what size package he needs. He’s on his honeymoon, just stabbing around in the dark.

But I think this comment from Harry Reid says it all:

““He learned a lot about how we feel,” Reid said after yesterday’s session.”

Kevin Jackson is an author of four books in sales and politics, as well being the author of The Black Sphere blog. He has been published in Africa News and Hoovers. Visit Kevin at http://theblacksphere.blogspot.com or email him at [email protected]
The Black Sphere online magazine is at www.openzine.com/theblacksphere, and you can catch Kevin on The Black Sphere radio show every Thurs 9P-11P Central (times subject to change) http://blogtalkradio.com/TheBlackSphere
Facebook Twitter
Kevin JacksonJanuary 11, 2009
2 minutes read