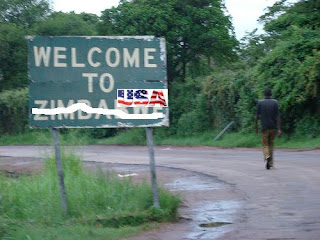 America is beginning to look a lot more like a Zimbabwe “Mini-Me“with each passing day. Similarities are, we have an African leader, he believes he is Robin Hood, and we now talk in terms of “trillions”, when speaking of finances.  Corollary:  In Zimbabwe, it is easy to be a trillionaire; and in four years, it may be just as easy in America.

Since this word trillion is now part of our daily lexicon, thanks to Obama, it begs the question, “How big is a trillion?”

Sounds like we could end the mortgage crisis in one fell swoop? And personally, I am willing to sacrifice, accepting only ten minutes of interest that is earned on $1T. That’s me…Mr. Magnanimous!

As for Zimbabwe, they went 100 times better, and introduced the $100 trillion bank note. That Mugabe is a real futurist. Why print a $1T note, when you can get ahead of the curve and print $100T note? Perhaps it is Mugabe who is “the smartest guy in the room” and not Obama. I will wait for the mainstream media to get back with me on that one.

Since Soros is so interested in African politics with his overwhelming support of Obama, and he is obviously interest in “being rich”, I think Soros should invest in the Zimbabwe currency. I’d like to know somebody who is a true quadrillionaire, perhaps even a quintillionaire! Let’s do the math!

For those of you who were wondering, a quadrillion follows a trillion, then quintillion, septillion and so on, as the chart below indicates:

Remember when you were a kid, and they would tell you statistics like, “…if you stacked up one trillion $1 bills, you could reach the sun“? Admittedly, I was the little kid who would say, “Wouldn’t all the money burn up, before it reached the sun?” Even at eight years old I was too smart to be a Liberal.  Suffice it to say that, I would consider anything after a decillion a “butttload“, wouldn’t you?

This Z$100T note is worth US$33 on the black market, according to this article in the Telegraph. And the value literally drops as soon as it is printed. The question you may be asking yourself is, “How does a country get to the point of having to print “buttloads” of money?” The answer might surprise you.

When Mugabe took over in Zimbabwe, he engendered a program called “land reform“, whereby he seized the farms of Whites who lived there, and then redistributed [this is actually what they called it] the farms to native Africans. The problem was that the native Zimbabweans did nothing with the farms, since they had never run farms. Nor did they have the capital to run the farms properly.

Now it has been argued that since the native Zimbabweans could not afford to buy this land, it was right for the government to take it from the actual landowners, and gift it to the people who needed it more. I don’t need to draw you a map for you to know where this is going.

Welcome to the good ol’ USSA? Except even Liberals will not be so blatant as to try to take land. At least not yet. No they will take it from us in taxes, which is exactly what they propose to do. So we are seeing the very beginning of The Zimbabwe Condition in Obama’s policies. All that’s left to do is to start printing money, and come Jan 20, the presses will be working overtime folks.

When you hear Obama backing down on repeal of the tax breaks “for the rich“, and offering additional tax cuts, don’t think that he has finally decided to abandon his socialist agenda. All it means is that he has had a “come to Jesus meeting” with those smarter than he, and he has seen his own light. So publicly, he can still be “the smartest guy in the room“.

Because unlike Reagan who is looking at how the free market can help energize the economy, Obama still believes that government can do the same. So he will be redistributing the wealth. He just believes that you won’t see the sledge hammer overhead, because you will be too busy celebrating your tax break…yes, the tax break that you already are getting, courtesy of W. A bit of liberal trickeration, aka smoke and mirrors.

And in the meantime, America will just keep printing money, just like Zimbabwe. Soon in America, being a millionaire will mean little, financially speaking. And $1000 bills will be like Zimbabwe “Mini-me” dollars – only as good as toilet paper…just worth less.