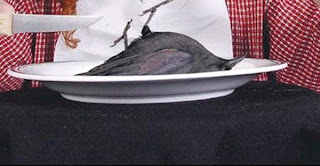 Sorry for not posting yesterday, but Bush and Cheney dropped in for a visit, and we took turns waterboarding Liberals.

Anyway, if you have ever have a taste for crow, just dine at the White House over the next four years, as crow is being served daily.

In the adoption of yet another of the “eight more years of the failed Bush policies“, Obama must reconsider one of his uninformed, infantile stances during the campaign, that has indeed followed into his presidency.

Of which Bushism do I speak? The potential deployment of missile systems in Poland.

Obama is actually reconsidering his original stance on this. Who would have thunk it, right? When you consider how “spot on” he has been in so many other areas [no lobbyist, no pork, open and honest administration, highest ethics], and all the promises that he has kept thus far.

Now the story I read has this title: “Obama administration to take softer stance on missile defense“. Based on this title, it is evident that the media is still worshipping at the altar of Obama, because the real title should have been something more like “Obama Owes Bush an Apology“, or better yet “Obama Pimp-Slapped by Yet Another Bushism“.

Of course Obama and his media sycophants will frame this as, “The president has finally had time to study this…”, blah blah blah, shish kum-ba. Translation for this would be that Obama had no idea what he was saying at the time, and he was selling America turd sandwiches with no mayonaise.

There will be no discussion of the fact that Bush got it right, because Obama is smarter than Bush, right?  So if Bush got it right, then that would make him smarter than Obama. And we have learned from the media, that no matter the subject, Obama is the smartest guy in the room. Haven’t you seen his pensive look, head slightly tilted upward as he gazes yonder? That means he’s smart, damnit!  Now don’t you go getting all stupid on me Conservatives.

Ok enough fun. You see people, in the real world looking smart doesn’t translate to being smart. And being made to appear dumb by the idiot media, doesn’t make you dumb, as evidenced by Bush.

Bush’s advantage? Information. When you are being briefed daily by our clandestine agencies, as Bush was, you get to make what is known as “informed decisions“, and not stupid Ivy League, ivory tower, theoretical and ultimately stupid comments. Liberals, I suggest you re-read that part about “informed decisions”.  And don’t look for hope and change.

Think the media will credit Bush for using this missile system as a negotiation strategy with Russia to stop the Iranians from moving forward with their nuclear program?

Here is how Yahoo News put it:

“Echoing Vice President Joe Biden , who said the new administration wants to push a “reset button” on U.S.- Russia relations,Undersecretary of State William Burns told the Interfax news agency inMoscow last week that, ” The United States is quite open to the possibility of new forms of cooperation” with Moscow on missile defense, Iran and “the whole range of security issues with Russia .””

Well that’s pretty close to an admission that Obama got it wrong, however I remind you that Bush is too dumb to have this as his strategy.

From what I am taught, yes indoctrinated to believe, diplomacy just didn’t exist in Bush’s lexicon, even if this tactic might be considered hard-fisted diplomacy.  It is common knowledge, thanks to our mainstream media that Bush was a warmonger, intent on invading all non-US countries and protectorates…for oil! 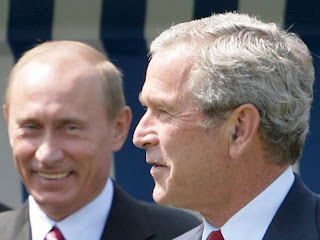 When it comes to security of America and international diplomacy, Bush played chess and Obama well, he is still playing with marbles in the dirt.

And while Obama and his gang of incompetents are pushing the “reset button” on US-Russia relations as Biden suggests, I suggest Obama go to Staples and see if he can find that “Easy” button. Something tells me he will need it.

Speaking of “reset buttons”, I’m beginning to think there are few Obama kool-aid drinkers who wish they could push the reset button. Hopefully when finished with therapy, they may enter America “clean and sober“. Let’s say a short prayer for them…Amen.

As for eating crow, Obama shouldn’t worry. I hear crow taste a lot like chicken.

Kevin Jackson is an author of four books in sales and politics, as well being the author of The Black Sphere blog. He has been published in Africa News and Hoovers. Visit Kevin at http://theblacksphere.blogspot.com or email him at [email protected]
The Black Sphere online magazine is at www.openzine.com/theblacksphere, and you can catch Kevin on The Black Sphere radio show every Thurs 9P-11P Central (times subject to change) http://blogtalkradio.com/TheBlackSphere
Facebook Twitter
Kevin JacksonFebruary 15, 2009
3 minutes read
Don’t Miss Out!