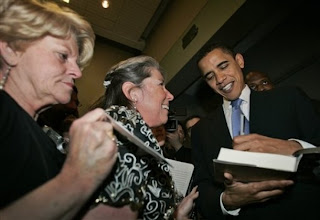 The Department of Redundancy Department at ObamaNation reports the following breaking news…again: The stimulus bill is not stimulating at all.

This is not a deja vu moment, it is just Obama still selling low expectations at a high cost.

Just recently we got yet another doomsday prophecy from ObamaNation, as referenced in this report from the NY Times:

“As President Obama prepares to sign the $787 billion stimulus bill, administration officials sought to temper expectations, warning that the economy has not yet reached bottom and that increased economic activity as a result of the legislation would “take time to show up in the statistics.””

But we were told during the election that under Bush things just couldn’t get any worse? Pray tell, did Obama lie?

Well the economy has indeed gotten worse, but Obama, our leader, purveyor of “hope and change”, elected to inspire us, instead reminds us:  “I inherited this mess“. Oh and would somebody bring me my brown underwear.

Obama’s election was to be the cure for all our ills, or that is how the mainstream media sold it. Yet we find things “getting worse, before it gets better“, as Biden prophesized much to the disdain of the “Immaculate Perception“.

So to save us, Obama plans his West Coast swing where he will sign Obamulus von Porkulus into law, while simultaneously asking us to lower our expectations. Apparently stimulus is all fizzle with no sizzle fa shizzle.

You would have to be a complete moron to believe that the government can create any jobs, much less 4M new jobs.

Speaking of complete morons, what has Obama been up to since gaining approval of Obamulus von Porkulus last week?

First he went on a campaign tour pushing “turdburgers” to the American public who are obviously and overwhelmingly appalled at size and scope of “the package”. [Excuse me while I whip this out!]

Next he spent a romantic weekend with ‘his babies’ momma‘, where I would guess the subject of “the package” was discussed, at length. Have fun with the sexual innuendo.

Finally, we were informed by the mainstream media that instead of taking a day off, Obama worked on president’s day.  Diligent president he is, unrelenting in his pursuit of…trickeration?

With something so important you would think that one day could make a dramatic difference, yet Obama had the legislation on his desk last week, ready for signature. Why didn’t he “git ‘er done“?

He didn’t “git ‘er done“, because Obamulus von Porkulus was never about the economy!

Even Obama’s own economic advisors won’t take ownership of this turd. As a friend of mine wrote to me recently, “…looking for the good side of this so-called stimulus bill, is like saying you will pick up a turd from the clean end“.

Inside of Obamulus von Porkulus are buried little Liberal jewels like health care reform, gun control, and other morsels of the Liberal agenda, particularly things that will reassure their easy election…in perpetuity!

And with 1000+ pages that were not read by anybody before signature, we are about to find out what core American values have been stabbed through the heart.

Kevin Jackson is an author of four books in sales and politics, as well being the author of The Black Sphere blog. He has been published in Africa News and Hoovers. Visit Kevin at http://theblacksphere.blogspot.com or email him at [email protected]
The Black Sphere online magazine is at www.openzine.com/theblacksphere, and you can catch Kevin on The Black Sphere radio show every Thurs 9P-11P Central (times subject to change) http://blogtalkradio.com/TheBlackSphere
Facebook Twitter
Kevin JacksonFebruary 17, 2009
2 minutes read
Don’t Miss Out!