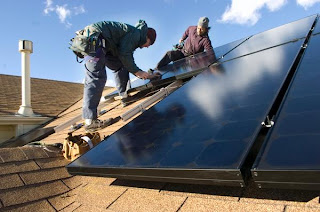 The other day Obama was in Colorado touting Namaste Solar as his new poster child for Obamulus von Porkulus, saying that his “spendulus” package would help Namaste Solar create more “green” energy, and of course more jobs. Job creation at Namaste Solar based on spendulus…18.

Blake Jones, self-proclaimed hippie, ex-Halliburton oddly enough, and co-founder of Namaste Solar was on stage with Obama and Biden talking “green” energy. He was also there to help sell Obama’s turdburgers, explaining how spendulus was going to help his company and other solar companies. But as with all Obama poster children, the real story is what you don’t know.

You see, Namaste Solar is run like a commune. According to my sources, everyone at this company makes the same salary. You might want to re-read that. This type of pay structure might entice low-dollar workers, however you’d be hard pressed to find a real entrepreneurial type who would work under those conditions.

And if that is not a crazy enough way to run a company, here’s another policy that can only come from a warped hippie Liberal mind, and that is all employee decisions are made by consensus. Can you imagine trying to get a bunch of hippies to agree on anything via consensus? Maybe the quality and potency of regional marijuana, but that’s about it?

Namaste has survived solely on government subsidies at the Federal, state and local level, or they admittedly would have failed. The green companies have little reason for true innovation, because they are being fed with the money of the American taxpayer. They are pigs being fattened, with no pressure of ever being eaten.

The breakthroughs in solar have come however, just not from companies like Namaste or from the government. But from a much more unlikely source.

One of the most recent breakthroughs in solar technology strangely enough, actually came from a 12-year old kid from Oregon named William Yuan. As reported in Maximum PC:

“Yuan, a seventh grader from Oregon, set out to improve solar technology, which at the moment could be a lot more efficient. And he appears to have done just that. Yuan’s project, which he calls “A Highly-Efficient 3-Dimensional Nanotube Solar Cell for Visible and UV Light,” could shake up the energy industry and lead to real change into how solar energy is harnessed and distributed.”

Just to put it in perspective, for his revolutionary breakthrough in solar cell technology, Yuan will receive a $25,000 scholarship. But the Fed has been subsidizing solar technology for years, spending billions, and all the American public got was this t-shirt. Actually all we got was a hefty price tag for the black-eyes on the landscape.

And much of this funding went to Namaste, who prior to Obamulus von Porkulus was preparing to lay off much of its staff.

With the stimulus money they can now keep their staff and hire an additional 18 new people. I feel so stimulated that millions of taxpayers’ dollars have gone to help prop up the dream of an aging hippie, running a commune at the taxpayers’ expense. Nothing like seeing the Liberals utilizing the CIA: Communism In Action.

The Fed has spent literally billions of American taxpayer money funding “green” energy projects that the market has rejected with its pocketbook. Windmills were rejected because they are relatively inefficient, in comparison to other forms of energy. Bio-fuels needs three times the fossil fuels to create one time the product. 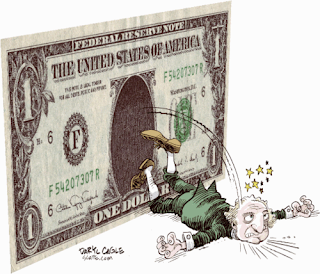 As for Namaste Solar, “You are not smarter than a 5th grader!” There has been more innovation from a 12-year old than has come from Namaste Solar and all its government subsidies. It’s no secret as to why. Communist don’t innovate.

Communists wait for the government to feed them, which is what has been happening for Namaste Solar in the past. And their future reward for doing nothing innovative is to get more and deeper handouts from ObamaNation. But let’s give Obama credit as he was able to create 18 new jobs, and save about 40.

Only 4,099,942 more jobs for Obama to create or save by my math. That is if you don’t count the 47, 000 that GM has announced recently they will need to layoff, even after receiving billions of our freshly minted greenbacks.

Kevin Jackson is an author of four books in sales and politics, as well being the author of The Black Sphere blog. He has been published in Africa News and Hoovers. Visit Kevin at http://theblacksphere.blogspot.com or email him at [email protected]
The Black Sphere online magazine is at www.openzine.com/theblacksphere, and you can catch Kevin on The Black Sphere radio show every Thurs 9P-11P Central (times subject to change) http://blogtalkradio.com/TheBlackSphere
Facebook Twitter
Kevin JacksonFebruary 19, 2009
3 minutes read