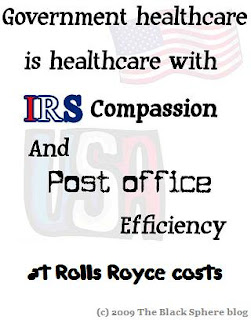 Just when you thought it was safe to get back in the water, Obama starts chumming again. This time he he’s fishing for even bigger game… healthcare.

If you think that the budget to “save America’s financial markets” was big, wait until you get a gander at this package.

This package is on Enzyte with a Viagra chaser, as estimates are that Americans spend $2.4T on healthcare annually. Yes, there goes that trillion word again.

Despite the fact that people from all over the world, particularly those with means come to America to get the best health care, Obama provides yet another doomsday scenario on America. Health care is the scare. At his next press conference, expect to see a religious revival, and an wagon train of invalids, “yearning to be free“…or healed.

It’s no secret that Obama wants what is termed “universal coverage” of all Americans, a euphemism for “socialized” medicine. It disturbs him that the US is the only “civilized” country who has opted out of socialized medicine. Disregard that he and all other politicians will not be on the system he wants for you and me, nor will anybody of means in the country. Because make no mistake about it, the privileged and the rich will not wait for health care like the rest of us who will be on the equivalent of the “IRS meets US Postal System” of health care.

Why wait less at the hospital, when you can wait more? Here is what we can expect under ObamaNation, as evidenced by Canada’s health care statistics:

“Canadians also experience waits for medical emergency and specialist services, although there are high numbers of people waiting under both the U.S. and Canadian systems. Studies by the Commonwealth Fund found that 24% of Canadians waited 4 hours or more in the emergency room, vs. 12% in the U.S.; 57% waited 4 weeks or more to see a specialist, vs. 23% in the U.S.”

Why not get a system that costs more and provides doctors and nurses with no incentive to be the best? For a comparison of the US system compared to the world, visit this site:

There are two key points to almost all comparisons. The first is cost. What you will find in all comparisons of socialized medicine versus the current American system with respect to cost is this statement:

The second critical point is how doctors are compensated, and here is what you get:

“Doctors: Most paid by government through salary or fees; some doctors accept private insurance or fees directly from patients.”

Do you really believe the best doctors will be government paid doctors? Yeah, because the government is so good at everything else, right?

I have as much interest in this system as watching two blind men talk in sign language. 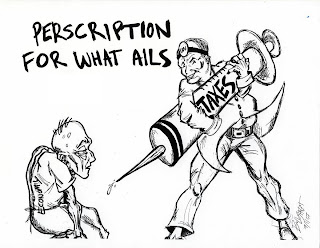 What Obama should be focused on is the waste and the fraud within the existing system.

Next, what Obama won’t tell you is that we are already paying for socialized medicine in this country as I have stated time and time again. If an illegal alien has a heart attack, he is rushed to the nearest county hospital, treated, and you the American taxpayer foot the bill. It’s not exactly “well baby care”, but mission accomplished. And ObamaNation knows that healthcare is covered for the most part, and only needs tweaking, not destroying.

Yet, crisis management is the order of the day. So Obama and his clan are about to have another porkfest, at the expense of the best medical system in the world. The hidden agenda was recently passed Obamulus von Porkulus, and Liberals won’t rest until they have given you the same system that the rest of the world has…crappy.

Liberals are meddlers. They don’t really care about improving the quality of healthcare in America, they just care about making it “even” for everybody…even if even sucks!

Kevin Jackson is an author of four books in sales and politics, as well being the author of The Black Sphere blog. He has been published in Africa News and Hoovers. Visit Kevin at http://theblacksphere.blogspot.com or email him at [email protected]
The Black Sphere online magazine is at www.openzine.com/theblacksphere, and you can catch Kevin on The Black Sphere radio show every Thurs 9P-11P Central (times subject to change) http://blogtalkradio.com/TheBlackSphere
Facebook Twitter
Kevin JacksonFebruary 24, 2009
3 minutes read
Don’t Miss Out!