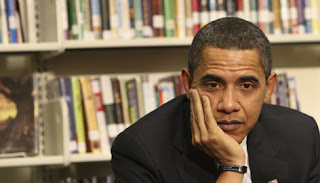 Today I picked up the USA Today outside my hotel room and on the cover is a picture of a dejected Obama, head resting on his hand, eyes tired, staring into the abyss. You’d think the Steelers had lost the Superbowl.

The headline read something to the effect that Obama has “lost some of his glow“. In the picture (left) he looks as if he is saying, “I had no idea how tough this job is.” Actually as I think about it, he is more likely thinking, “I’m no way prepared for this job.”

So why the long face? The guy can’t pick a cabinet. President 101. The first step for a president, and a baby step at that. You’d think that with the way Obama ran a practically flawless campaign, that he could get past President 101. Yet he had two cabinet pick resignations in one day!

I imagine that “golden glow” that only Liberals can see will end up looking like a ring of soot soon for his kool-aid drinkers, when he actually starts addressing real problems. I’m certainly readying my “I told you so” for all the knuckleheads who elected this inexperienced, no talent, snake-oil salesman (my apologies to all snake-oil salesmen) to the highest office in the land.

The real story wasn’t about the resignation of Daschle, but about Obama admitting that he had “…made a mistake” yesterday. Pay attention here fellow Conservatives. Don’t be fooled by Obama’s mea culpa, saying that he erred. That admission was about as real as Pamela Anderson’s breasts…and hair, and nails, and so on. Fake through and through.

Typically I must parse Obama’s statements, as they must be translated to English from ObamaSpeak, and his comments yesterday are no exception. In doing this, I want you to take note on how he couches his so-called “mistake”, and thus the real lesson here.

Obama says that Daschle’s tax mistake is Daschle’s personal mistake. Then Obama makes the self-deprecating comment that it was his mistake for essentially not knowing. Huh? How could Obama know? The fact is…he couldn’t. It was Daschle’s responsibility to tell him, and thus it was ALL Daschle’s mistake. But Obama is willing to share in this mistake, which is the genius in ObamaSpeak.

Obama knows this is in no way his mistake. But by doing the mea culpa, he knows people will say, “…well Daschle not paying his taxes is not your mistake, Mr. President“. “How gracious President Obama is, how magnanimous of him to not blame Daschle.” By the way, “Daschle, step into my office…because you’re freakin’ fired!”

Obama wants people to believe that he is capable of admitting a mistake, when in fact he is quite incapable of doing so. This is a setup people. Pure unadulterated subterfuge. This tiny admission that is really a non-admission of error takes your mind off the mistakes that are already being made, like his enormous deficit spending, no job creation package.

Further, he wants a pass on future mistakes, the big mistakes, which I promise you will keep coming just as assuredly as Liberals asking for handouts and tax increases. 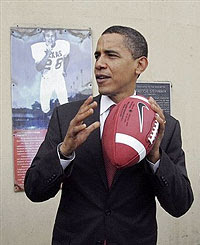 Conservatives, we have had a great two weeks exposing Obama as a wide-eyed dreamer, incapable of even doing the most basic things in Washington, like selecting a cabinet that follows the law. Imagine the skewering that Bush would have taken by the media and Liberals at this point, had his cabinet positions fallen through like this, and had he shoved that Ms. Piggy of a pork bill down our throats?

As this neophyte is still transitioning into office, attending Washington roasts, and hosting his Superbowl party, and failing at the basics of “picking a felonless cabinet“, there are Americans freezing to death throughout this country, trapped in ice with little help from FEMA.

While Obama is falling on the sword for Daschle and his other cabinet picks who were content to screw the American taxpayers, Iran launched a new spy satellite, and North Korean redrew the border between it and South Korea.  And they are preparing to test long-range missiles, threatening South Korean’s sovereignty, and the people of the United States. I know…it was the Superbowl, and not just another football game, so Obama should get a pass for not addressing these vital issues at some undetermined time in the future.

Obama, if you think you are tired now, just wait. You will soon find that being president is not about having the coolest house in which to host Superbowl parties.