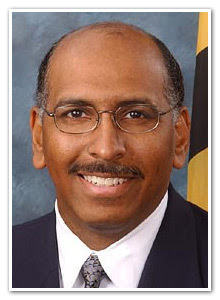 I am a huge Michael Steele fan, and I echo Michelle Obama “patriotic” comment that, “…for the first time in my adult life, I am proud to be an American“. Just kidding. I have been a proud American since birth, and I see no real story about Michael Steele being the first Black head of the RNC, unless we are talking about the anecdote in history.

Steele is eminently qualified to run the RNC. He is an ex-Lieutenant Governor, politically astute, smart, good-looking, articulate…and of course clean. But the mainstream media will spin this as “Republicans finally break with their racist past and elect Steele.” Or something like that.

Is a Black running the RNC long overdue, likely. Michael is exactly what the Republican Party needs. The Republican Party has needed new blood, and for quite some time. We have been fighting the fight with the same incestuous ideas, and it isn’t working. How far behind the times are we? We are still manufacturing buggy whips.

The hope is that Steele will bring fresh ideas, born of a younger, more energized generation of Republicans and Conservatives. And Steele should be able to make a dent into the Black community, since for the first time in history an RNC chairman won’t have the race card thrown in his face, right? Perhaps not.

Remember that use of the race card for Liberals works two-dimensionally. It works to intimidate non-Black Conservatives to be politically correct at all times. Example? Recall when David Howard used the term “niggardly” in explaining stinginess of a bill to two Black staffers, and he was fired. Fired because those two Black staffers were too ignorant to know what the word meant. Why don’t you fire the janitorial staff for using “Spic and Span”, or fire the admins when they discuss the TV show Nip-Tuck?

Next, they use the race card to attempt to shame Black Conservatives and Republicans by saying that we are sellouts, Uncle Toms, and a host of other things, specifically tokens.

So don’t be surprised when the media says that Republicans are hopeful that Steele’s ethnicity will allow him to reach into the Black community, and they label him a token for his efforts. After all, Steele is the first Black chairman of the RNC, and in the eyes of the Left it would make sense that Steele is a token of the Boogeyman.

After all the accusations, innuendo, outright lies, and conjecture about Steele’s selection as RNC chairman, and what the motivation is of the Republicans, what you won’t hear is how many Black DNC chairmen, tokens, the Democrats have had. Because they have had only one. And it is one that most Democrats are happy to forget.

His name is Ron Brown, and his resume was scant to say the least. Essentially he was in the Urban League and then ran Senator Edward Kennedy’s campaign. That’s about it.

Brown is the only Black DNC chair, and he was elected in 1989. He would serve in this role until his death in 1993. There were none prior and have been none since.

Does anybody remember that Brown’s death came just as there were scandals around Enron’s campaign contributions, and the subsequent Enron debacle? And then Brown was right in the middle of the scandal around the Clinton administration selling secrets to China. And conspiracy theorists claim that the Clintons had Brown killed.

So the most racist hate-group in America, the Democrats get a free pass. They hide behind the fact that Blacks vote for them overwhelmingly, so how can they be racist? Nevertheless they are racists of the worst kind, even lower than Aryan Nation types, who are openly racist and ignorant.

But the Democrats slip up from time to time, as they did recently with Reid wanting to block Burris’ senate appointment, and Pelosi’s siding with the eugenicists on abortion.

Yet even with these slip ups, there is no outcry from Blacks. It’s because Blacks have been purchased. Think circa 1850, when White Democrats were purchasing slaves, only now they do it with welfare and “stimulus” checks. So silly Negros will vote for these racist pigs, no matter how long they maintain “The Nearly All White Leadership Club of the Democratic Party“.

It’s good to see that the Republican Party really did elect Steele not “…by the color of his skin, but by the content of his character.”

Kevin Jackson is an author of four books in sales and politics, as well being the author of The Black Sphere blog. He has been published in Africa News and Hoovers. Visit Kevin at http://theblacksphere.blogspot.com or email him at [email protected]
The Black Sphere online magazine is at www.openzine.com/theblacksphere, and you can catch Kevin on The Black Sphere radio show every Thurs 9P-11P Central (times subject to change) http://blogtalkradio.com/TheBlackSphere
Facebook Twitter
Kevin JacksonFebruary 1, 2009
3 minutes read