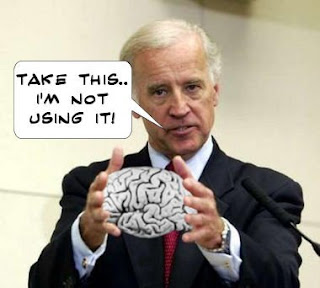 Are you getting the feeling that when things are looking bad for Obama, he uncages Biden to scare us? As I wrote in The Biden Experiment , Biden is 100% effective in his role of …being stupid. The perfect distraction.

So Biden is in Europe doing what he does best…pontificating, adding to his title of VP the role of, “Master of the Obvious“.
Just recently he said that “…we must improve our relations with Russia.” As opposed to what, degrading our relationship with Russia? Don’t we strive to improve our relations with everybody? I have yet to hear a politician say, “We need to ruin our relationship with [insert country here].”
Liberal kindergarteners hear Biden, and they say, “…he’s so smart“. For the rest of us, this was Biden just stating the obvious, and trying to appear intellectual. Doesn’t work, Joe. You’re still two strands short of complete human DNA, and Conservatives know it.

While in Europe, Biden warned us yet again of the “perilous road ahead“, speaking of course about the economy. In a word, “Duh“. Tell us something we don’t know, Joe.

With the Democrat-created financial debacle, compounded with the Democrat-controlled Congress’ absolutely certifiably insane leadership, you get a Liberal sprinkling of nuts.  But you want Trail Mix.

Then add these nuts to the rotten fruit of Obamulus von Porkulus, and you have a full fledge nutty, fruity mix. And of course… a perilous road ahead.

Here’s an example of Liberal “leadership“, and it involves the unions. These Liberal congressional nuts are intent on building up unions, something that the America people reject 80%. What’s the Democrats’ plan to shrink the unions, who are ruining America’s businesses? Get rid of the secret vote. This way the unions can intimidate workers, and likely expand.

Now in my analysis and research on unions, i.e. using the “common sense” model for you purists, I find that companies with unions are less profitable, if profitable at all. And they are ultimately doomed to failure. For you guys who want to dispute my common sense on this issue, I will tell you that the most “unionized” companies are Fed contractors, industries already being propped up by Federal money, or staple industries, i.e. truckers, longshoremen, etc.

A union company trying to compete in America without one of those advantages mentioned earlier has one foot in the grave and another on a banana peel. That company cannot compete in the long run. It’s only salvation would be socialism. Thus, socialism equals the “perilous road ahead“. Thanks for the warning, Joe.

Later on his European jaunt Biden shifts back to the international stage, this time not stating the obvious, but showcasing his ignorance in world affairs and diplomacy, and attempting to sound menacing.

His comment to reporters regarding Iran was, “we will talk, but know that we are ready to act.” Biden is proof that a comment that says so little, can illuminate just how big of an idiot a person is.

That was sure to get the Iranians’ knees knocking. I’m sure they went straight away and destroyed their recently deployed spy satellites, and are now dismantling their nuclear program. After all, Obama’s actions of releasing terrorists, no longer allowing harsh interrogations of enemy combatants, cutting the military budget, and canceling the anti-missile system in Poland, all point to our willingness to “act”.

As I heard a comedian once say, “…that’s about as tough as being Mike Tyson’s roommate in prison, and Mike says he going to sodomize you. Then you defiantly say…’Ok, but for how long’?”

Finally Biden exposed his special mission to support a small and much maligned group of people. This group is persecuted all over the world. Yes, Joe is attempting to find homes throughout Europe for the most heinous of terrorists and those bent on destroying America and other infidels. Joe is launching a sort of “Habitat for Humanity“, that might more appropriately called, “Joints for Jihadist“. He is asking countries in Europe to step up and take some of the finest Liberals GITMO could produce…Islamic jihadists. After all, they are just misunderstood. 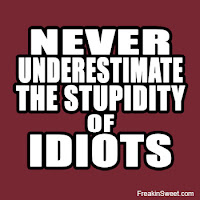 The media will spin Biden’s trip throughout Europe as an attempt to change America’s perception in the world, to mend fences, as if we need to mend any.

They will say that Biden is acting on behalf of the president to spread Obama’s good intentions, and to alert the world to the kindler, gentler America, where they can bring all their problems. Though that is all spin, I do believe that some will benefit from Biden’s visit, just differently than they think.

And as I said earlier, Biden will take the spotlight off his boss, who has had a miserable two weeks.

But more importantly Biden will help a select group of people in every town in Europe that he visits.  He will prove that he is an equal opportunity idiot, showcasing his lack of knowledge in all parts of the Europe, and on a multitude of subjects, with the occasional hint at the truth.

“Village idiots” everywhere will celebrate, as their titles are temporarily usurped with Biden’s arrival. And they will weep like old ladies at a funeral when he leaves.

Kevin Jackson is an author of four books in sales and politics, as well being the author of The Black Sphere blog. He has been published in Africa News and Hoovers. Visit Kevin at http://theblacksphere.blogspot.com or email him at [email protected]
The Black Sphere online magazine is at www.openzine.com/theblacksphere, and you can catch Kevin on The Black Sphere radio show every Thurs 9P-11P Central (times subject to change) http://blogtalkradio.com/TheBlackSphere
Facebook Twitter
Kevin JacksonFebruary 8, 2009
4 minutes read
Don’t Miss Out! 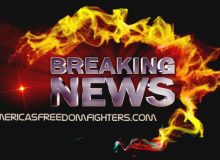