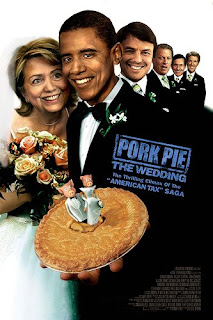 So which is it? Pork, or as Chuck Schumer the Democratic Senator from New York said recently put it, “a little pork, that Americans don’t care about“? Or “No pork“, as Obama and Pelosi promised.

Welcome to the Era of Opposites. The Era of Subterfuge. “He said, he said“, at the highest and most heinous level.

All this from the most ethical administration in the history of America. I guess if you keep saying it enough, you might actually believe it.

Based on Biden’s conversation with Obama that “…in the best of circumstances, this plan has about a 30% chance of working“, it would appear that privately at least, neither one of them believes this plan has a real chance of working. Yet in his first press conference as president, when queried about this conversation, Obama dismissed Biden like a drunk uncle. “Uh, uh, well you know Joe.”

The “uhs” have it folks. As you may have guessed by now, Obama really doesn’t believe in Joe. Nor does he really believe in his massive pork bill.

Nevertheless, after the passing of his love child with Pelosi, known by me as Obamulus von Porkulus , Obama is out doing what he loves best: Convincing people that he is not crazy, and he is the best man for the job of re-creating America.  I didn’t know we needed to be re-created?

Just like he wants to convince us of the soundness of his decisions thus far, for example Biden as VP. And his cabinet choices of lobbyists, Clinton retreads, and tax cheats. And the idea that this will be the most ethical administration in history. Oh, and that Obamulus von Porkulus really is a stimulus package, and not the lunatic idea of a Manchurian Candidate set on the destruction of America.

When you consider where all this “stimulus” money is going, the only logical conclusion one can make is it pays to stink at running a state, a company, and your personal finances.

As for states, monkeys would be better at running Blue states than most of their Democratic governors. These states are putting band-aids on bullet holes, financially speaking.  Can Democrats even balance a personal check book?

Yet Liberal idiot constituents continue to elect these “tax and spend” bureaucrats, and they continue to spend spend spend, knowing that, as Obama put it a while back, “Help is on the way.”

And it’s no different for companies. If your company is run poorly, “Help is on the way.” We have entered the era of “reward bad behaviors and punish good behaviors”.

I think that if your company gets a bailout, then the CEO and his executive staff should have to wear a button that says, “A Monkey Could Run This Company Better Than We Can“. I think the employees should have similar buttons that say, “I am inefficient and worthless, and dragging my company down.“

Finally, if you run your personal finances into the ground, “Help is on the way.” Keep buying that bling, nice cars, the phat wardrobe, because Obama will pay your mortgage, as we have been told.

Here’s a short lesson in human nature. If you keep giving a crackhead crack, he will keep smoking it. He won’t get a job, and he won’t become productive. Point: Liberals are for the most part, crackheads!

But crackheads make the best kinds of voters…compliant and easy to manipulate, and cheap to buy. Tell them there is something in it for them, and they forget the sneakly little points, like the Fed knowing all about your health issues.

So if you smoke, then your Federal insurance won’t necessarily cover you for issues related to smoking. What other sneaky legislation lurks in the bowels of Obamulus von Porkulus? 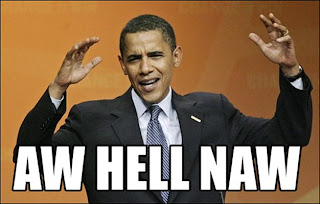 As for pork in this bill, Schumer tried to soft-shoe the truth, saying “…little bits of pork“, bacon bits, as it were. What’s a few hundred million dollars here and there. It’s only money…your money.

Schumer is telling us just how the Democrats feel about our money, which is it’s not our money, it’s theirs.

As for Obama, he likes the gamesmanship of having the Schumers and Bidens tell you that this pork stinks, because he gets the chance to sell you some rotten, stinky pork.

Kevin Jackson is an author of four books in sales and politics, as well being the author of The Black Sphere blog. He has been published in Africa News and Hoovers. Visit Kevin at http://theblacksphere.blogspot.com or email him at [email protected]
The Black Sphere online magazine is at www.openzine.com/theblacksphere, and you can catch Kevin on The Black Sphere radio show every Thurs 9P-11P Central (times subject to change) http://blogtalkradio.com/TheBlackSphere
Facebook Twitter
Kevin JacksonFebruary 12, 2009
3 minutes read