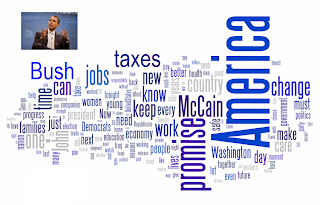 In an effort to truly distance himself from “eight years of the failed Bush policies“, Obama changed some words, ending the use of the term “enemy combatant“. I’m sure you can see how this monumental change, in terminology, clearly separates Obama from Bush’s stance on GITMO?

But what to call these former “enemy combatants“? If I may, I suggest either Liberals, progressives, [regressives] or how about just…Democrats.

According to Retired Army Lt. Col. Stephen Abraham in this article from Yahoo News:

“There’s absolutely no change in the definition,” Abraham said in a telephone interview. “To say this is a kinder more benevolent sense of justice is absolutely false. … I think the only thing they’ve done is try to separate themselves from the energy of the debate” by eliminating Bush’s phrasing.

Needless to say, the word change is meant to be an appetizer for the Obama zombies. As for the main course Obama promised, most other aspects of GITMO will remain intact, much to the chagrin of the knuckleheads that voted for the new Idiot in Chief. So much for the change they needed.

If you are wondering why Obama decided not to move as fast on GITMO, and most other of the “eight years of the failed Bush policies“, I will break it down for my conservative readers, and you liberals who read my blog on the downlow.

Prior to becoming president and getting briefed by our military, the CIA, NSA, and other XXA, Obama was as an ignorant elitist, otherwise known as an idealist. Idealists are those who think they know everything, because they hear a “sound bite” on a subject, and wrongly believe that their education qualifies them as authorities on anything and everything. “I think it, therefore it must be“. They have very little concept of how the real world works. Most Liberals qualify as idealists, particularly if you take out the education part.

Up to the point of being briefed, Obama the junior senator, and otherwise unaccomplished hack was back-seat driving on “eight years of failed the Bush policies“. Worse yet, he was back-seat driving blind. As if having a juris doctorate from Harvard qualifies him as an authority on international terrorism.

After being briefed, Obama got a dose of reality, a kick in his crotch, as it were. Our military leaders and clandestine agencies broke things down for him, explaining things to him as if he were a 3rd-grader; so he could “get it“. They explained how the real world works.

Obama likely got that pensive, snobby look he always gets when he wants to act like he knows it all; head askew, eyes gazed yon. This is the look when someone stupid tries to appear smart, however they know how stupid they really are.

Nevertheless, on the inside, Obama was thinking “Oh my Allah! Holy crap! How do I not show how stupid I was and still am, and appear confident?! Just be cool, Barack…only the Conservatives will know how much of a dunce you are. The media will handle them.” Experience is something you don’t get, until just after you need it. 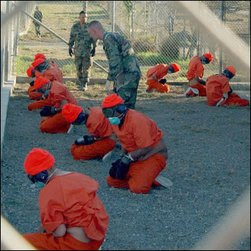 For Obama changing words is big news…no huge news. This is because Obama’s only real currency is “words”. And they are worth about as much as the contents of his suits. This is what happens, when you elect a no talent, unaccomplished paper-pusher, whose only skill is campaigning. And let’s not forget that he is a lawyer…and wordsmith.

Change a few words to existing legislation, add ipso facto, and presto…you are right back where you started: “eight years of the [echo] Bush doctrine…perhaps not as failed as we were led to believe.

I’m glad Obama found time to remove the term, “enemy combatants.” When you consider all that is happening in the world, a few examples being Chinese ships threatening our navy in international waters, Iran building nuclear weapons, North Korea doing missile testing, Russia threatening to put bases in Cuba, the economy in the tank because of Obama (et al), well I can see how important this change was in the scheme of things. Nice prioritization?

And with Congress operating at around $1B an hour, I’d say that Obama has indeed ushered in a new era in American politics. The Politics of Distraction followed closely by The Politics of Destruction, as he fights the War on Achievement.

I say to the anti-America, God-hating, ACLU crowd and other knuckleheads who voted for Obama, “You were warned…and you got what you paid for.”

Kevin Jackson is an author of four books in sales and politics, as well being the author of The Black Sphere blog. He has been published in Africa News and Hoovers. Visit Kevin at http://theblacksphere.blogspot.com or email him at [email protected]
The Black Sphere online magazine is at www.openzine.com/theblacksphere, and you can catch Kevin on The Black Sphere radio show every Thurs 9P-11P Central (times subject to change) http://blogtalkradio.com/TheBlackSphere
Facebook Twitter
Kevin JacksonMarch 16, 2009
3 minutes read
Don’t Miss Out!