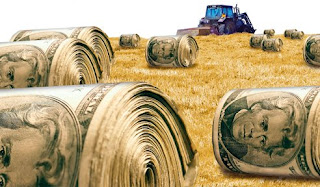 Will the real Barack Hussein Obama please stand up? Obama is actually saying that he wants to cut something from the government. The words cut and Obama are indeed being used in the same sentence, and it’s not Jesse Jackson threatening to cut Obama’s “pecans” off this time either.

So who are the targets of Obama’s wrath? Subsidies. But it’s not the subsidies that are really making a dent in the budget, like say the auto industry for example. We are all aware of the amount of money the government has rationalized stealing from hardworking Conservatives to give to an industry that can’t survive on its own.

But this time, Obama has targeted the good old middle-American farmers.

Obama is willing to give mega billions to lazy people who do nothing, however he is not willing to continue subsidies to farmers who at the very least are actually working.

You should know that I don’t like subsidies. I believe that the market should not be tinkered with, as it will “self-adjust”. However, I admit that farm subsidies are more complicated issues, since food is a critical commodity, and none of us wants to miss a meal. Most of us can survive with the cars we have.

If too many farmers fail or decide to leave farming, the nation’s food supply can be put at risk. And since Nature has a lot to do with whether crops are produced or animals survive, I understand the need for the propping up farmers.

Further, the cost of this program amounts to $1B a year for ten years, as compared to the budget to provide free houses for deadbeats which amounts to around $700B, give or take one or two…hundred billion.

No matter what, the idea of a socialist cutting anything, intrigues me, so much so that you’d think they buttered my behind and are calling me ‘Biscuit’. But I am not happy folks. Because as with all things Obama, you must look beyond the “smoke and mirrors“.

The real story here is that when Obama was running for the Democrat nomination, he pandered to farmers; bamboozled them. So much so in fact that in Indiana he sat in a barn on a stool amidst hay bales and a wagon, and promised farmers less administration and legislation.

He promised to be their messiah. He would bring rain in times of drought. Obama in fact promised them high-priced, aka subsidized pork, as he said to Shawn Krull, 35, and fifth generation farmer in this statement:

“I’m not going to do anything that has not been worked through by the people who know the ground best.” Obama told him, “I do want cheap pork chops.”

No truer words could be spoken. Because as we all know, Obama loves only the best and most expensive pork.

When you consider the size and scope of the $787B Obamulus von Porkulus, $1B a year is nothing more than a rounding error. Why take it away? Aren’t there bigger budget “fish to fry”? Of course. 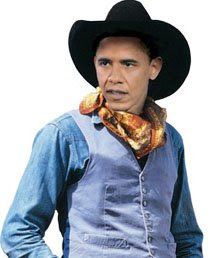 Obama handled farmers, like he handles all his believers. He told them what they needed to hear…to get their vote. Then he threw them under what has to be the biggest bus known to mankind, because it is littered with the bones of believers.

Obama is fine breaking promises to Midwestern farmers, as their issues are not mainstream. He could care less about White farmers, except when he knew during his campaign that he needed their support in the Midwest to take the focus off (1) his lack of citizenship, and (2) his lack of true leadership credentials, and (3) his racist history and agenda.

Taking away what amounts to such a small amount is meant to remind White America that there is a new sheriff in town, and the real Obama has indeed stood up…but not for the reason you may have thought.

Kevin Jackson is an author of four books in sales and politics, as well being the author of The Black Sphere blog. He has been published in Africa News and Hoovers. Visit Kevin at http://theblacksphere.blogspot.com or email him at [email protected]
The Black Sphere online magazine is at www.openzine.com/theblacksphere, and you can catch Kevin on The Black Sphere radio show every Thurs 9P-11P Central (times subject to change) http://blogtalkradio.com/TheBlackSphere
Facebook Twitter
Kevin JacksonMarch 2, 2009
3 minutes read