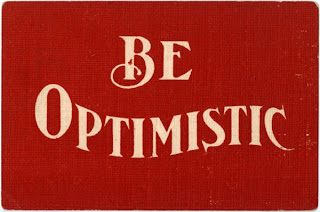 Well put on your happy face, as Obama is getting in touch with his optimistic side. Are you as refreshed and relieved as I am about this? I know the warm sensation of happy being blown up my butt, when I feel it, and “…that don’t make me gay“; at least not in that “not happy” sense.

Obama is happy just in time… to save the economy. Uncanny timing for his optimism. Particularly when he told McCain that there was no reason to be happy, and that McCain was just happy to be a rich White guy with a lot of homes.

All during the campaign, Obama told us that the economy was sinking like a leaky boat. So I’ve been bailing water since Nov 4; boy are my arms tired. “Eight years of the failed Bush policies“, are the constant reminders. Does the name Pavlov ring a bell?

Obama said that we were in the “worst economy since The Great Depression?” I know it was a harmless oversight, but we are actually in the worst economy since Obama’s surrogate Daddy… Jimmy Carter. Now, Obama says “Psych! Y’all know me. I’ll say anything to get elected!”

Because of Obama’s previous dire warnings, last week I did what my great grandmother did during The Great Depression, and I hid my money in my mattresses.

Then Obama decides to take a page out of the playbook of yet another great Republican president, Ronald Reagan. Obama is attempting to…exude confidence. The difference being, Reagan actually was confident.

Now for Obama to stay optimistic it will take all of us. Remember when he lectured to us that he couldn’t do it alone? Apparently it’s not easy to find one’s happy place, at least not for a lying, no talent having, worthless Liberal hack of a president. Translation: Obama needs scapegoats, and plenty of them.

So our time has come, you racist, un-American infidels. We are being sent to the front lines, as our Idiot in Chief is now commanding us to spend and not save. And Obama is optimistic that we will do what we are told, because he said for us to do it. This is what will make him happy. And he didn’t even use the “magic” word, as all his words are magic. I feel honored that he is enlisting us lowly peons to help save the economy.

Stock market cratering, and the economy working harder than a prostitute on nickel night, and Obama is telling me to stop putting my money in my mattresses, to in effect, stop saving. He then directs me to now go into even more debt, and… start buying. I sure like the sound of that! Go get that new car, buy that house, and with whatever is left over, go get some stock in financials companies. Or better yet, the auto industry! It’s as if I’m a crack addict, and instead of sending me to rehab, Obama wants me to keep using.

I suspect Obama is reading “Leadership for Dummies“. He’s on page one, where he read the first rule of leadership is to “exude confidence.” I don’t think the next chapter will tell Obama to have the public…spend its way out of debt. Nice try at “raising Keynes” (pronounced Kane, so you Liberals will get that pun), but my confidence in Obama is low, as I’m having an ‘out of money experience’ these days. 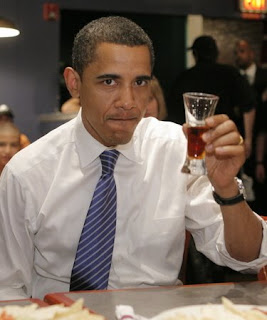 Perhaps the real mantra of America should be “Ater fifty days of Obama”. Forget eight years of Bush!

Don’t think for a second that Obama is an optimist. He is not. And you should be smart enough to know that the economy is actually worse now, after Obamulus von Porkulus, than it was when Obama was saying the sky was falling. It won’t get any better, unless Obama gets a lobotomy, and thus gets just a wee bit smarter.

Obama knows that the Boogeyman was assassinated, thus there is little need for pessimism when there is nobody to blame it on. Pessimism won’t get the poll numbers up, so optimism is the new emotion du jour. This means Obama now has to start getting in touch with his Whiter side, his inner optimist. Showcasing his Blackness only plays well, when he can be…the victim.

Now some may argue that Obama knows what he is doing. I disagree, and consider yourselves warned. For Obama there is only black and white, with no shades of grey. If you know him as I do, it’s easy to see which color he is donning on any given day or issue.

Kevin Jackson is an author of four books in sales and politics, as well being the author of The Black Sphere blog. He has been published in Africa News and Hoovers. Visit Kevin at http://theblacksphere.blogspot.com or email him at [email protected]
The Black Sphere online magazine is at www.openzine.com/theblacksphere, and you can catch Kevin on The Black Sphere radio show every Thurs 9P-11P Central (times subject to change) http://blogtalkradio.com/TheBlackSphere
Facebook Twitter
Kevin JacksonMarch 18, 2009
3 minutes read
Don’t Miss Out!