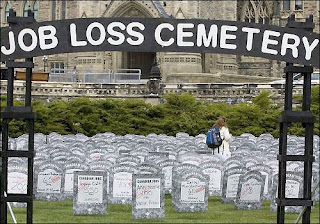 It’s no wonder Conservatives are having tea parties all over the country. It’s because we have a no talent lying conniving non-leader running the show, and the word is out…all over the world!

For you Everclear-spiked, kool-aid-drinking, Obama-worshipping, “don’t touch me on my binky”, drunk-uncle Democrat racists who voted for Obama, I say to you, “How many promises does he need to break for you to admit you’re a pinhead?”

Recall that the messiah was supposed to create or save 4.1M jobs. He is constantly visiting companies extolling the virtues of Obamulus von Porkulus, yet the only one that created jobs was Namaste Solar. I believe those eighteen (18) jobs cost us a few million, maybe a billion dollars…peanuts in the Obama budget.

But here’s the really bad news, as reported by Yahoo Finance:

For the 10th week in a row, the number of people receiving jobless benefits grew. It now stands at nearly 5.6 million, the government said — an indication that the labor market is still grim.

New claims for unemployment benefits rose again as well, to a seasonally adjusted 652,000, up from 644,000 the week before. The government also said the economy shrank at a 6.3 percent annual clip in the fourth quarter, slightly faster than its previous estimate.

Ten weeks. Hmmm…and Obama has been “Supreme Leader of the Free World With Emphasis on Amerika” for how long? Ironically….almost ten weeks!

5.6M jobs lost in this timeframe. Considering that ObamaNation will reign for another 146 weeks, we have the potential to lose as many as 81,760,000 jobs. At this rate, Soros may be the only person left to tax.

Add to this the fact that the economy is shrinking faster than ObamaNation actually said originally. I know it’s difficult to believe, given Obama’s dedication to truth and openness.

Has anybody even considered what the jobless rate needs to be before you can’t get enough money from the taxpayers? Well if you have, you’ve been goofing off on such oddities…stop! We’re already there.

It was calculated recently that if the government taxed the top 5%, you know, Obama’s target tax audience, 100%, ObamaNation could not pay the debt that we have already incurred.

Yet Obama believes we can continue to spend our way out of this. I know that works so well in Banana Republics, where inflation rates are one million percent. These countries must be where Obama is getting his historical evidence to support his insanity.

However most civilized, [at least we used to be civilized,] nations try to truly trim the fat, and not attempt to advance lunatic ideologies.

We can’t blame all this on Obama, however, though we do have “64 days of failed Obama policies…and counting“. No, fellow infidels, we have two years and ten weeks of a racist Democrat-controlled Congress who contributed:

On top of that, about 1.5 million Americans are getting benefits under an extended unemployment pay program approved by Congress last year.

Yes Pelosi and Reid extended unemployment benefits, which will compound the problem of paying the bills.

But they did save all those UAW jobs for some chump change, when you consider the size and scope of Obama’s package… $50B for the auto industry is just rounding errors. 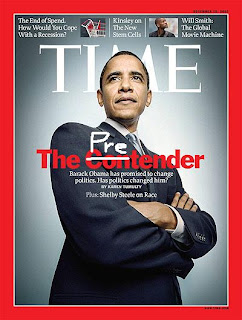 I must admit, I am curious to know how much punishment Liberal knuckleheads can absorb. ObamaNation is indeed “punch drunk”, as Steve Kroft suggested on 60 Minutes, and has shown no prowess in any area of government. There is not one successful area of government that the Obama team can claim. Heck, he can’t even field a team. When that happens, doesn’t the other team have to forfeit?

America’s new beacon of light more resembles that from a lightning bug. He even has Hugo Chavez calling him ignorant. There are a few people from whom you just shouldn’t take any “guff”, and anybody named Hugo is one of them. But Obama has to “laugh it off”, because it’s true.

But it’s not just Banana Republic dictators to whom Obama has demonstrated his ignorance and arrogance. He has managed to irk our biggest creditor, China, and our best ally, Britain. With friends like Obama, we don’t need any “formerly known as ‘enemies‘“.

Obama won’t save or create 4.1M jobs, because now he needs to create over 10M jobs to get there. He won’t save the economy either, as you can’t when you are destroying it.

There’s no kool-aid hitting rivers all around America…just tea! I’m taking green tea, in order to do my part to save the planet…and jobs!

Kevin Jackson is an author of four books in sales and politics, as well being the author of The Black Sphere blog. He has been published in Africa News and Hoovers. Visit Kevin at http://theblacksphere.blogspot.com or email him at [email protected]
The Black Sphere online magazine is at www.openzine.com/theblacksphere, and you can catch Kevin on The Black Sphere radio show every Thurs 9P-11P Central (times subject to change) http://blogtalkradio.com/TheBlackSphere
Facebook Twitter
Kevin JacksonMarch 27, 2009
3 minutes read
Don’t Miss Out!