One calculation Obama missed in his War on Achievement, code name Project Insanity, is the discussion moving from race to finances. As long as the discussion was kept on the subject of that Boogeyman known as “race“, Obama likely could have swept his gross incompetence under the rug.

Incompetence in full view, Obama has gone from scared to panicked. And so have many of those who put him in office. I prophesied after Obama’s election, that within a year you won’t find many of the *52M people who voted for him who will admit it. I think I may reduce that timeframe to six months.

I said it before and I will say it again. Obama is panicked, because there simply is no White guy to blame now. The Boogeyman was captured, declared a terrorist, and held at GITMO until Nov 4. He was moved to an “undisclosed” location, until Jan 20, whereby the moment Obama was elected, the Boogeyman was unceremoniously executed.

Instead of mourning the election of Obama, the rest of us should have been celebrating the death of this monster that has haunted us all these years! Rejoice fellow hardworking Conservative infidels and former racists.

Obama has tried to revive the ghost of the Boogeyman, which is “eight years of George Bush“…you know, that mean old White racist Republican, who could be blamed for everything under the sun. However the tread is wearing off those tires with each drop in the stock market. I ain’t ‘fraid of no ghosts…Ghostbusters!

Obama is hanging on by a thread, as he waits for his “bribes” to the leeches of society (you know who you are) to kick in. The bribes can keep the hounds at bay, while he continued his “scorched earth” tactics on the rest of the America public, more specifically hardworking, tax-paying Conservatives. However, given the way the government is doling out the new watered down welfare, I hardly think Obamatrons will consider this reparations for getting him elected, particularly when balanced against their losses in their 401(k) plans.

For subterfuge, Obama is trying to “divide and conquer”. In this tactic he has the help of the media, who wants to discuss Rush Limbaugh and Michael Steele, and the so-called rift inside the Republican Party. I’m surprised this discussion hasn’t gone racial. Are you?

Fat, rich White guy, and newly appointed (by media) leader of the Republican Party going after the embattled Black RNC chairman. “The man” keeping a brotha down. I learned many years ago, that race problems in America are less about race and much more about economics.

Most non-Black Americans would be overjoyed to meet Michael Jordan, Tiger Woods or Denzel Washington? They have crossed the “color” barrier, and entered into a financial world that most of us will never know. This is a world where a guy like Billy Joel can marry a woman like Christie Brinkley. [Chuckle]

We can’t all be rich athletes, musicians or stars of one sort or another. However we can go to school, work hard, save or money, and grow up to become bill paying Conservatives, and not deadbeat racist Liberal Democrats always figuring out better ways to wage war against achievers.

Since the Obama War on Achievement began on Nov 4, the stock market has fallen by 31%. The phenomenon of the market falling occurs these days with regularity it seems every time Obama speaks publicly or makes a policy decision. A 35 point gain in the market was deemed the other day as a “market rebound“. For Liberals, I guess it is! However, Conservatives are asking how low can it go? 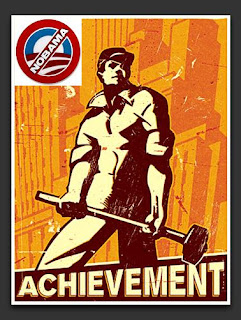 The shift in our discussion has gone from racism to finances, thankfully. This discussion highlights Obama’s total incompetence. People are now actually going beyond his “words” (and cleanliness), and feeling the impact his policies are having on their retirement and investment portfolios. Portfolios are not Black or White, but green, and I am not talking Al Gore green.

No matter how you slice this cake, there won’t be enough to go around. And Obama will soon find out that the world isn’t as focused on race, as much as they are focused on their pocketbooks.

Nonetheless, Obama won’t likely change, as he suffers from a worse pathology, that won’t allow him to admit he’s wrong. He is a deluded dreamer in search of Utopia, one of his own creation, and one that does not exist. I say a president who believes he needs to remake America should not be president. Particularly one who can’t operate without a Boogeyman.

And by the way America, I’d like to introduce you to the new and real Boogeyman…Barack Hussein Obama.

* 52M voters is speculative, since there are likely dead voters, and certainly multiple voting ACORN members. Likely number is closer to 46M.

Kevin Jackson is an author of four books in sales and politics, as well being the author of The Black Sphere blog. He has been published in Africa News and Hoovers. Visit Kevin at http://theblacksphere.blogspot.com or email him at [email protected]
The Black Sphere online magazine is at www.openzine.com/theblacksphere, and you can catch Kevin on The Black Sphere radio show every Thurs 9P-11P Central (times subject to change) http://blogtalkradio.com/TheBlackSphere
Facebook Twitter
Kevin JacksonMarch 11, 2009
4 minutes read
Don’t Miss Out!