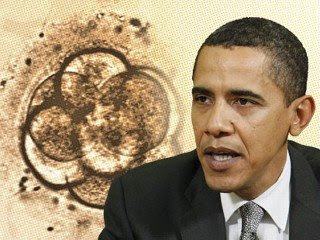 Obama’s decision to lift the ban on stem cell research showcases his true core, and this reversal of a Bush policy should come as no surprise to anybody. Obama is pro-abortion, supporting even the most heinous form, that being partial-birth abortion. He blatantly disregards the weakest of humans, in order to protect the most vile. Perhaps he would care more if embryos could vote?

Here is what Obama said on the subject of embryonic stem cell research:

“Rather than furthering discovery, our government has forced what I believe is a false choice between sound science and moral values. In this case, I believe the two are not inconsistent. As a person of faith, I believe we are called to care for each other and work to ease human suffering.”

Certainly Obama has no true compassion for the very old. And why should he feel differently about people with mental and physical disabilities, such as muscular dystrophy, Down’s Syndrome, Alzheimer’s, Parkinson’s, and other illnesses that in effect make life a burden…not for them, but for society.

For Obama and his ilk, embryonic stem cell research is meant to “correct” these people; make them “right”, and not in the political sense. Obama likely figures once you’ve survived the gauntlet of Democrat eugenic attempts at your life, you deserve a chance to actually vote someday.

What will experimentation on the most weak guarantee us in terms of our future health? Let’s look to Obama’s own comments for the answer:

“I cannot guarantee that we will find the treatments and cures we seek. No president can promise that…and with the urgency required to make up for lost ground…”

No guarantee for treatments and cures, but we need urgency (there’s that word again) to make up for lost ground. The mind of an idiotic socialist. So what ground have we lost?

Back in 2007 there was breakthrough in stem cell research that isn’t even being considered:

“Researchers have figured out how to reprogram adult cells into a state that is nearly indistinguishable from that of embryonic, pluripotent stem cells. This is huge news that promises to accelerate the pace of research in the field.”

There appears to be no real need to use embryonic stem cells for this research, since the regular stem cells will do. And there were geometrically more stem cells made available under Bush, than Clinton. 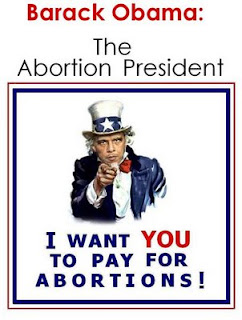 Obama’s comment references him as being a person of faith. Obama used “faith” for one thing: To get elected. Political expediency. No true person of faith would support the barbaric acts that Obama favors. Period.

I know what faith is, and I can tell you without a doubt, that Obama’s only faith is in himself. As I reported in past writings, Obama hasn’t been to church since his election…oh, but he does shoot hoops on Sunday.

For the Jews, Protestants and Catholics, and other so-called evangelicals who voted for Obama, I find you despicable. You are the true sellouts. Because Obama is promoting and exporting an agenda of infanticide all over the world, and you turn a blind eye and apparently an unsmelling nose.

Well I for one smell the stench of yet another dung heap…plated in fool’s gold.

Kevin Jackson is an author of four books in sales and politics, as well being the author of The Black Sphere blog. He has been published in Africa News and Hoovers. Visit Kevin at http://theblacksphere.blogspot.com or email him at [email protected]
The Black Sphere online magazine is at www.openzine.com/theblacksphere, and you can catch Kevin on The Black Sphere radio show every Thurs 9P-11P Central (times subject to change) http://blogtalkradio.com/TheBlackSphere
Facebook Twitter
Kevin JacksonMarch 13, 2009
3 minutes read
Don’t Miss Out!