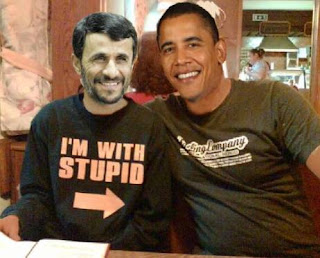 Barack Hussein Obama reached out his hand to his Persian brothers and sisters, only to have it cut off. Thankfully, he’s a lefty. How’s that for double entendre?

Obama proves that he really is very different than Bush, in that Obama genuinely believes that he can change the hearts and minds of Iranians towards America…and the Jews. Obama believes that his ability to persuade is just that powerful. He thinks he can talk them out of their stated goal of eradicating Israel from the face of the earth.

Bush realized all he could really do is maintain status quo, and not allow the Iranians to get the bomb, since they would use it.

In his address to the Iranian people, Obama said that he seeks engagement with Iran that was “honest, and based on mutual respect.”

We are known as ‘infidels‘ by the Muslim community and the Iranians. Their religion says that they must either convert the infidels or kill the infidels. I don’t like our choices.

As for the Jews, the Koran eliminates one of their choices, leaving them what’s behind door number one: Death by Muslim.

The Muslims have no choice, but to kill the Jews, because “Jews are Jews“. Despite Jews ability to leave the Jewish religion and potentially convert to Islam, they can’t leave their birthright. Again, “Jews are Jews“.

In case you were wondering, the Koran says that Muslims must battle the Jews…forever! At least now we have the definition of forever…when the last Jew is gone from the world!

The Jews have no stated goal of eradicating the Muslims. They just want their little piece of land, and to be left alone. This is why they have on numerous occasions sat down with good intentions to resolve the conflict. But to no avail.

Barack Hussein Obama to the rescue. With a name like that, surelt the Jews should trust him.

Forget that nobody else has been able to accomplish bringing these two groups together, and they were much smarter than Obama. One was a very popular Jew named Kissinger. If a guy named Kissinger couldn’t do it, then I don’t think it can be done. Nevertheless, Barack Hussein Obama maintains that he can do it.

Now I know what some of you idiots might be thinking, and that is, that’s how things get accomplished, i.e. when somebody decides to take on the impossible. And there are Liberals, idiots who believe that Obama, the Messiah could very well be the person to accomplish the impossible. After all, he won an election. 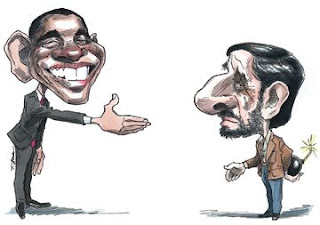 So far, not so good at least. Maybe Obama has another trick up his “left” sleeve, because the outcome of Obama sending an olive branch to the Iranian people was a very public “pimp slap” from the Iranians. Ouch!

The Iranians said that Obama needed to change the US policy towards Iran. Check. And they added that they would be completing their “peaceful” nuclear reactor by the end of the year. Checkmate.

Obama will find out that the problem with brokering occurs when one of the parties will not negotiate. Such are the Iranians and the Muslim world in general. They are determined to make forever come…forever defined as the eradication of the Jews.

The interesting thing is what the Iranians said without saying it: Thank you Allah for detonating in America a new weapon of mass destruction…named Obama.

Kevin Jackson is an author of four books in sales and politics, as well being the author of The Black Sphere blog. He has been published in Africa News and Hoovers. Visit Kevin at http://theblacksphere.blogspot.com or email him at [email protected]
The Black Sphere online magazine is at www.openzine.com/theblacksphere, and you can catch Kevin on The Black Sphere radio show every Thurs 9P-11P Central (times subject to change) http://blogtalkradio.com/TheBlackSphere
Facebook Twitter
Kevin JacksonMarch 23, 2009
3 minutes read
Don’t Miss Out!