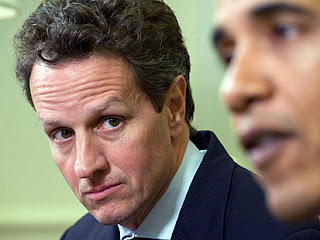 In the inimitable words of Gomer Pyle, “Surprise , surprise, surprise!” The US deficit is higher than we imagined? If you are a Liberal who voted for Obama, you’d have to be practically brain dead to not be just a little concerned. And the real Boogeyman hasn’t even been discussed.

When I hear Obama speak about the economy, I feel as if I am listening to a first year economics student at a community college. I am amazed at Obama’s lack of insight, and his inability to admit that he has charted the wrong course for America, not limited to the economy.

Consider that they are still dealing with “cabinet issues“, and Geithner demonstrates less command over the economy than the homeless man I see from time to time in my neighborhood. What up Larry?

I find it hilarious tracking Obama’s perusal of Leadership for Dummies, apparently just now getting to the chapter on “Loyalty to Subordinates“. Like most Obama moves, he read the chapter title, and decided that he didn’t need to actually read…the material.

I predict this is the way Obama got through life, forming most of his ideas by scanning. Now that I think about it, how else could Obama sponsor or co-sponsor over 800 pieces of legislation in only 123 days in the US Senate, unless he only did drive-bys? Oh I know Liberals, Obama is the smartest guy…like e-ver!

Obama believes that he is showing leadership by keeping the incompetent Geithner. He is standing behind a guy who has to be the most incompetent Treasure Secretary in American history, and who has showcased a lifetime of incompetence in less than sixty days! Stand by your man…give him two arms to cling to.

Despite that fact that there is three times (3X) the money supply in the economy with no gains in productivity, Obama and his ‘mini-me’ Treasury Secretary see no need to panic. Despite the grumblings of our chief creditor, China, Obama and mini-me want to stay the course. Despite the fact that soon your money will be worth 1/3 of what it is today, they are “clear on their objectives“. Sure, if the objective is hyper-inflation and a bankrupt economy by the end of his term. You’re ahead of schedule, Barack!

Obama won’t even bother to recalculate based on “…worse economic conditions than he imagined creating.” Undaunted, Obama will tackle four pillars as they are called: health care, education, clean energy and deficit reduction

Excuse me, didn’t we forget two pillars: Waste and corruption. Not that there have been any indicators of our government bureaucrats being corrupt. And who am I but a lowly tax-paying hardworking Conservative citizen to say that our government is wasteful. After all, spending a few billion dollars on transsexual beauty pageants likely has significance that is “beyond my pay grade.”

For you smart Conservatives, one thing is missing. I won’t hold my idiot savant Liberals in suspense, and will just say it. The biggest missing element, the foundation of our economy from an economic point of view is entitlements. 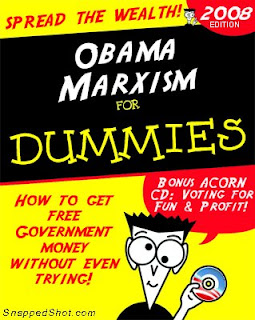 There is no mention of entitlements, because doing something about it would mean that Obama would have to punish most of America’s losers, excluding of course those who actually do need or have earned entitlements.

Well “entitlements” are the real boogeyman, and not that fake one, like [insert White Republican here] that racist Democrats have always held before America. If Obama thinks he can skirt the issue of entitlements for long, he is sadly mistaken. Because if Obama and Geitherner continue down the path they are headed, They will have a lot more people…seeking entitlements.

This entitlements Boogeyman is real. And he’s bigger and blacker!

Kevin Jackson is an author of four books in sales and politics, as well being the author of The Black Sphere blog. He has been published in Africa News and Hoovers. Visit Kevin at http://theblacksphere.blogspot.com or email him at [email protected]
The Black Sphere online magazine is at www.openzine.com/theblacksphere, and you can catch Kevin on The Black Sphere radio show every Thurs 9P-11P Central (times subject to change) http://blogtalkradio.com/TheBlackSphere
Facebook Twitter
Kevin JacksonMarch 24, 2009
3 minutes read
Don’t Miss Out!