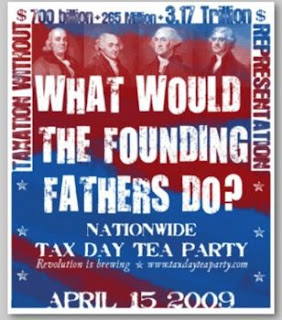 In honor of Tax Day and the Tea Parties happening all over the nation today, I thought I would give my take on taxes.

Being from a poor family, taxes were not much of a problem as my grandparents always seemed to get a little something back. That’s what happens when your combined income is little more than $15,000 a year.

But they raised their little rugrat in the capitalist tradition, so I grew up to become moderately successful, at least in the eyes of the government. So when I owned my own company I was rudely introduced to the tax system, learning quickly that ambition in America is indeed rewarded…with high taxes.

Yes, America is indeed the land of opportunity, if you want the opportunity to pay outrageous taxes to help support illegal aliens, terrorists (pardon me…”man-made disasterists“, and better yet…other lazy Americans.) How I long for the good old days when Uncle Sam lived within his income and without most of mine….ahhh. It has almost reached the point in America where, if you take a day off, you fall behind in your income-tax payments.

So what’s involved in our tax system?

First, the code is around 1.3M words and 75,000 pages, I believe. Do you honestly believe that anybody has read and understands it? There is a saying that “…income tax forms have been simplified…beyond all understanding.” Am I the only conspiracy theorist who believes this is intentional?

But surely our congressmen know the code, right? Considering that Congress didn’t read the1300 page multi-trillion dollar budget document, what would make anybody believe they would read the document that funds the budget? “What is ya…ignant?”

Something tells me they will just take their own word for it, that they have sufficiently written a document to fleece the taxpayers. And if they missed something, they do have the IRS on their side. It is better to give, than to deceive.

Through outright theft, politicians have solved the problem of getting people to pay taxes they can’t afford for services they don’t need. Things like transsexual beauty pageants and swine manure management in Iowa. Ironic. A friend and I were just talking both these topics just yesterday. Sometimes politicians amaze me with their ability to “get inside my head!”

Every April 15, American taxpaying citizens, also known as right-wing extremists and “man-caused disasterists” have a rendezvous with debt. It’s because politicians find it a lot easier to trim the taxpayers than to trim budgets. April 16 remnants: A harp sits where a piano used to. 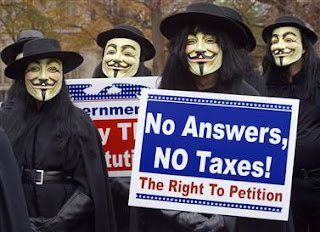 I have a sure-fire way to make money: Invest in taxes. They always go up! And in Obama’s War on Achievement, he is coming after those of us too stupid to become deadbeats. Our taxes will go up. It’s that simple.

Raising taxes on producers makes about as much sense as fanning a fire to cool its heat. But since when did this administration decide to rely on logic in decision-making. As I see it, we are allowing crackheads to steal our money, but secretly hoping they will seek rehab and not more crack. Any bets on the outcome?

So I say to my fellow right-wing extremist, infidels, “man-made disasterists”, formerly known as citizens of these formerly great United States, “I regret that I have but one income to give to my country.”

Kevin Jackson is an author of four books in sales and politics, as well being the author of The Black Sphere blog. He has been published in Africa News and Hoovers. Visit Kevin at http://theblacksphere.blogspot.com or email him at [email protected]
The Black Sphere online magazine is at www.openzine.com/theblacksphere, and you can catch Kevin on The Black Sphere radio show every Thurs 9P-11P Central (times subject to change) http://blogtalkradio.com/TheBlackSphere
Facebook Twitter
Kevin JacksonApril 15, 2009
3 minutes read