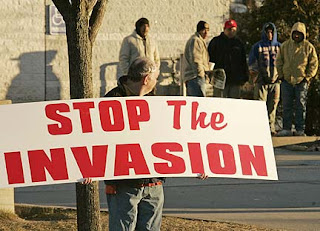 Let’s talk immigration. First I’d like to say that illegal immigration comes from all over the world, not just Mexico. However since Mexico borders the US, is in a state of turmoil, and Mexicans without a doubt are the biggest abusers of America’s lack of immigration enforcement, I need to pimp slap some Mexicans, both foreign and domestic.

I don’t buy into the Carlos Mencia, La Raza mentality that you somehow deserve special treatment. Mencia is the Mexican Jesse Jackson, pandering to the Mexican crowd who want something for nothing, and using that issue to find an easy audience. Hey Carlos, try really being funny. That may be too difficult for you, Esse.
Look at the immigration laws of Mexico, and how they enforce them. Let’s just say that it nowhere near as lenient. But laws protecting America’s borders are immoral right? Discriminatory. Just plain stupid! Just like laws protecting your home are stupid?

Why not let every vagrant who wants to, come live with you. Hey Miguel, make yourself at home. By the way, who ate those leftover enchiladas I left in the fridge?

And where’s the Mexican pride? The idea that you are comfortable with being known as the people who take our menial jobs is just pathetic. Come take our banking jobs or run one of our auto company. Those jobs are soon to be readily available. You can work for ObamaNation…for $1 a year! If you’re going to think and act like Liberals, then why not go all the way?
Now I know that many Mexicans have immigrated to the US and gone on the find the American Dream, that being the pre-ObamaNation version, and not what we have now…The American Nightmare. My ex-father-in-law was one such Mexican.

He left a world of poverty and immigrated to the US, legally, without a pot to pee in or a window to throw it out of. He later joined the Army and actually fought for this country.

When he was honorably discharged from the Army, he opened a Korean restaurant in San Antonio…just kidding; it was a Mexican restaurant. The restaurant became successful in its own right, so he opened a second restaurant, thereby doubling his success. For you Liberals, that’s how it works.
He retired from the restaurant business and had a life of leisure, though not necessarily luxurious. I would say that he died a happy man. That was his American dream.

Our problem is that many of the Mexicans who are entering the US are doing so illegally, and frankly just don’t know how to live civilized. You are no longer bringing that strong Mexican work ethic and family tradition, but you have “caught on” to the system, and know that you are free to be lazy in America like many of our other Liberal Democrats.

Admit it. Our welfare system to you is living the good life, compared to where you come from. And this is not true of just Mexico, but many other countries. So America has become, “Welfare to the World.” 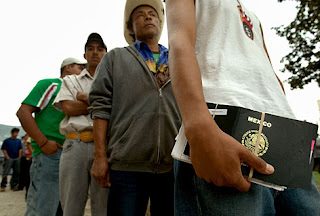 It used to be the dream of America was for opportunity. Now that dream is for the opportunity to get on our welfare system. And Liberal Democrats love people who want to be part of the “system”. A cog in the wheel.
So I’d like to thank all the illegal immigrants, particularly the Mexicans for coming to America to lower our standards and our standard of living, and helping Liberal Democrats like Obama and Pelosi expand their War on Achievement. But my question for you is where will you go, after you ruin America? I see no country who will replace her?

You can count on one hand the number of Americans who wish to live in other countries legally or illegally. Sure you get the occasional person absconding from justice, but in many cases, they were other countries’ citizens to begin with.

So when your countries begin getting the influx of illegal Americans coming to suck mother’s milk from the breasts of your country, then you will have the right to bash America. However until then, just send us legally your best and brightest, and not your deadbeats. We have enough of Liberal Democrats already.

Kevin Jackson is an author of four books in sales and politics, as well being the author of The Black Sphere blog. He has been published in Africa News and Hoovers. Visit Kevin at http://theblacksphere.blogspot.com or email him at [email protected]
The Black Sphere online magazine is at www.openzine.com/theblacksphere, and you can catch Kevin on The Black Sphere radio show every Thurs 9P-11P Central (times subject to change) http://blogtalkradio.com/TheBlackSphere
Facebook Twitter
Kevin JacksonApril 3, 2009
4 minutes read
Don’t Miss Out!